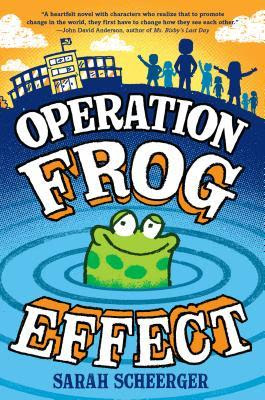 Ms. Graham teaches her 5th grade students to think for themselves, work together, and be aware of the ripples created by a single act. But when some of her students take an assignment too far, it's the teacher who ends up in hot water. What can they do to help save the best teacher they've ever had?

OK, that's a very simplified description, so a few more details. Operation Frog Effect by Sarah Scheerger is set in a California classroom with 31 students but the students are divided up into groups of four per table. Each table does projects, sometimes competing with the other tables, but the focus is on 8 students and the story is told through journal entries and letters. Each student has his or her own way of writing in the journal. Emily writes to a fake person named "Hope." Henry writes his entries as scripts because he wants to make movies, someday. Sharon writes her entries in verse. Blake is in remedial classes (the implication being that he's probably not great at reading and writing) and a talented artist, so he illustrates his.

In the beginning, the conflicts are mild. Emily is separated from her best friends. Sharon is lonely. Henry's sense of humor annoys Kayley. One of the children accidentally picks up another's journal and peeks, which leads to a discussion about privacy and how best to handle the issue. One of the students steals another group's project idea. But, then the children are assigned a project that requires more thought and they make the mistake of deciding to sneak out of their houses without telling anyone, to take notes for their project. Their hearts are in the right place but what they do is so dangerous that the parents become frantic, police are involved, and the teacher ends up getting blamed. One student, whose mother is an illegal immigrant, is put in a terrible position when attention is focused on the class. The complications and threads in this book are absolutely marvelous. It's amazing how many important topics Scheerger touches upon.

Oh, and there's a classroom frog (one of the children writes to the frog in his journal entries) who figures into bits of plot and gives the book and the final project their names.

Highly recommended - I love everything about this book. The characters are tremendously diverse and have vastly different home lives. They forge friendships, learn about privacy, gain courage (there are some inspiring Malala quotes included), show compassion, and figure out clever ways to solve problems together. There's a child with divorced parents: a traveling father and a depressed mother. One of the children loses his home. One is wealthy and privileged with parents who are used to swinging their weight around; she starts out a mean girl and ends up gradually softening. The illustrations are also a total delight. Because Blake's journal entries are illustrated and each journal entry or letter tells part of the story, portions are told through illustration.

Note: Gina Perry is not credited on the cover, but she is the illustrator and I think she certainly deserves mention. When the kids admired Blake's illustrations, I was nodding along. They were marvelous.

I received an Advance Reader's Copy of Operation Frog Effect from Random House in exchange for an unbiased review and I genuinely love this book. I laughed, I cried. Many thanks to Random House!

©2019 Nancy Horner. All rights reserved. If you are reading this post at a site other than Bookfoolery or its RSS feed, you are reading a stolen feed. Email bookfoolery@gmail.com for written permission to reproduce text or photos.
Posted by Bookfool at 7:04 AM