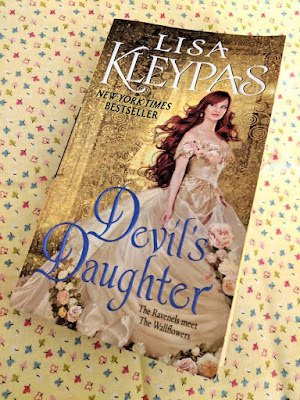 Phoebe, Lady Clare, is a widow with two small children who married a sickly man knowing he would likely not live long. In his early days at boarding school, he was tormented by a bully named West Ravenel. Phoebe has not forgotten, so she's particularly horrified to find herself attracted to West when she meets him at a family wedding. Why, she's practically bethrothed to the manager of her estate, although he hasn't yet asked for her hand in marriage.

West was not a good man before his brother inherited the family title. But, in recent years he has found joy in farming the family land and working to improve the lives of their tenants. He doesn't think any woman deserves to deal with a former cad like himself, so he's chosen to remain single. But, if there's one woman who can turn his head, it's Phoebe and he even enjoys hanging out with her children.

Will Phoebe and West be able to give in to their attraction permanently? Or will they just have a fling and move on?

That last line is not how a publicist would probably choose to describe Devil's Daughter but Phoebe and West definitely give in to their attraction physically. There is a tremendous amount of sex in Devil's Daughter. It bears mentioning because, near as I can tell from my recent romance reading, the sheer quantity of bedroom scenes is atypical. Whether or not that's to your taste is something you might want to consider.

Devil's Daughter is the 5th in "The Ravenels" series. I haven't read any of the other books; this one was sent to me unsolicited by Avon Books and I just happened to be in the mood for something light, shortly after it arrived. It stands alone fine but I suspect there are subtleties that I missed because I haven't read the previous books.

Recommended - I really enjoyed the banter between the two characters, West's enthusiasm over farming techniques (again, probably not for everyone, but I thought it was actually quite interesting), and the interaction between the hero and the heroine's children. My romance preference leans "clean" -- minimal sex or none at all -- but that's never a problem because I can skim those scenes if I feel like it, so the number of sex scenes didn't faze me, although I thought it was notable. Devil's Daughter is not a plot-heavy book, although there's a nice twist toward the end, and the conflict is admittedly weak. Yet, I enjoyed the book enough to consider seeking out the beginning of the series. However, I recommend reading reviews by people who have read the other books if you're a regular romance reader, since my opinion tends to be a shade different than the norm.