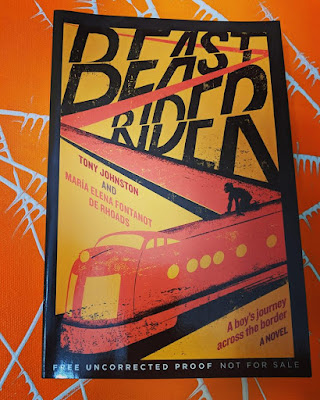 Beast Rider by Tony Johnston and Maria Elena Fontanot de Rhoads is the story of a boy's journey from Mexico to the United States. I jumped at the chance to review it when I saw the advertisement on Shelf Awareness. I've read a few tales of people escaping hardship by immigrating but most have been about immigration to Europe, not the United States, so I was excited to read a story that happens closer to home (fictional).

Manuel's brother Toño rode the train (illegally, as in climbing on top of the train and alternately walking and riding) to the United States from their home in Oaxaca, Mexico, a few years ago. They know he survived the journey because he occasionally calls home. Manuel misses Toño, his family lives an impoverished farming life, and he is curious about life in El Norte. So he decides to also make the journey. He will begin the dangerous trip by running to jump onto the train locally known as "The Beast". Even climbing aboard is dangerous, not to mention riding on top of train cars without handholds. People have been known to fall off or miss while jumping aboard and lose limbs or die. But, Manuel is determined.

My initial thought, as I began reading, was that Manuel's journey would be an event that took a few weeks or a few months, at most, even though the cover description says he's "robbed, arrested, beaten, and left for dead." But, it actually takes him about two years because he has to keep stopping to recover. Along the way, terrible things happen but there are good people who care for him, help him recover, feed, and clothe him, as well. It's an emotional journey and I often got choked up, especially when reading about the kindness of strangers.

Highly recommended - The storytelling style is unique and I had to adjust to it, but once I became accustomed to Johnston's voice, I found the story compelling and eye-opening. It took a while, though. When I was about 1/3 of the way into the book and realized that Toño was an illegal immigrant and that Manuel planned to enter the U.S. illegally, as well, I thought, "Well, this isn't going to be a book that's helpful." I figured it was the wrong viewpoint and people who are prone to thinking of Mexican immigrants in a negative light would just shake their heads and say, "See! Just as I suspected." But, besides illuminating the good and evil in people one might encounter in real life, Beast Rider actually places you in the midst of the incredibly terrifying and life-threatening process that is illegal immigration from Mexico and shows you just how much people are willing to go through to seek out a better life.

Quite a few Spanish words or phrases are used and there is a 6-page glossary to refer to. Beast Rider is for ages 12 and up.

This next part may be considered a spoiler, so I'll type it in white and you can highlight it to read if you're not worried about potential spoilers. I won't give away the ending, but I will say I thought it felt right and it was what I hoped for.

Manuel eventually does make it into the United States, but because he's illegal he can't get a decent job and neither can his brother; they just scrape by. They live better than they did in Oaxaca, from the standpoint of living space. But, without legal documentation, there's really no way to move up in the world and they live in fear of being caught and sent back. As you're reading about Manuel's daily life in Los Angeles, it becomes clear that his family may have been poor but they were happy and they had a loving support system. In other words, while their life was one of hardship in Oaxaca, it was really a better life. As such, you could definitely look at the book as one that supports legal immigration. I'd like to see something similar that digs into what it's like being surrounded by gangs, threatened and extorted, having loved ones killed, like many of the current immigrants coming from Honduras -- one in which going back is likely a death sentence. But, as a way to learn about why the journey is so dangerous (and, thus, so many large groups have been forming to fend off that danger), Beast Rider is definitely illuminating.

I received an Advance Reader's Copy of Beast Rider for review from Abrams Books. Many thanks!