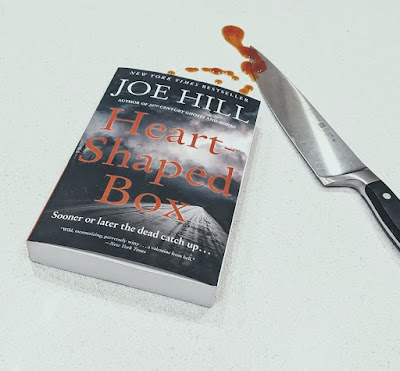 I've already talked about Heart-Shaped Box by Joe Hill, a bit, but I decided I wanted to have a separate post up that's got "RIPXIV" in the labels, so here 'tis. Let's do the goofy version of a review, shall we?

So, there's this rocker dude named Judas Coyne (not his real name). He's not a nice guy, really. In the past, he's been a bit of a sexual deviant because rock stars can get away with that crap. When he takes up with a woman, he calls her by the name of the state in which they met (or, maybe "hooked up" is the better term), rather than by her actual name. The same is true of his current babe, Georgia.

Judas collects macabre items and when a haunted coat comes up for auction, he buys it. Why not? He doubts its authenticity but whatever. When the coat arrives and it is haunted by the ghost of his former flame's uncle, he's creeped out. When it somehow plucks Georgia's finger and gives her an infection, he's spooked. When the ghost keeps showing up with squiggles in front of his eyes, he's freaked. Then, he finds out he was targeted; the ghost wanted to end up with him so he could kill Judas. How can Judas get rid of the ghost?

Epic road trip, that's how. Judas leaves with Georgia and his two dogs. Much chasing and haunting and making of revolting wounds that won't heal ensues. Death, destruction, and possession occur. But, it ends on a high note, so there's that.

Recommended, if you like that kind of thing - I gave up Joe Hill (with the exception of his short stories) a couple years ago, after I read The Fireman (link leads to my review, which I just posted with a 2016 date to backdate to the actual reading) because he has an unfortunate tendency to kill off cats. And, apparently dogs. But, the guy who makes my neck stop hurting told me, "You have to read Heart-Shaped Box and then talk to me about it!" when I told him about the RIPXIV. So I read it and we talked and you guys, it's really cool to have a physical therapist who likes to talk books. I am, however, still essentially done with Joe Hill. Except for the short stories.

Not sure why I didn't write a review of The Fireman at the blog in 2016 but the review I just posted is one I wrote at Goodreads. Fortunately, I had that content to move over to the blog. Goodreads now just shows my rating.

Email ThisBlogThis!Share to TwitterShare to FacebookShare to Pinterest
Labels: ghosts, horror, Joe Hill, recommended but not a favorite, RIP XIV