Invisible as Air by Zoe Fishman 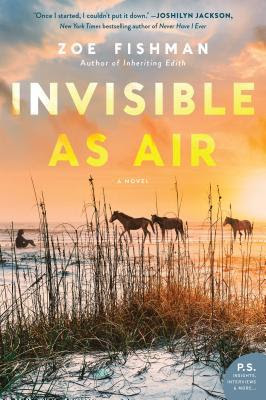 Either he did this all the time or he would make a one-time exception for a friend; she didn't care. She just wanted the pills. So badly.

Just these few hours without them in her system, her world was too much. Edges were sharper, the sun was hotter, her unresolved emotions too present. Sylvie much preferred the alternative. She would do what she had to do.


Teddy stopped eating, his stomach suddenly full. His parents didn't so much argue when they argued; his mom just lobbed firecrackers while his dad retaliated with water balloons.


In Invisible as Air, Sylvie has been privately grieving her stillborn daughter for 3 years but she has been unwilling to even say Delilah's name aloud. She's become distant and snappish. Her husband, Paul, has channeled his grief in a different way, exercising vigorously and becoming a shopaholic. He's purchased so much unneeded exercise equipment that credit card debt has become a problem. Their son Teddy is on the cusp of turning 13 and Sylvie is nervous about planning his bar mitzvah while dealing with work, the PTA, homemaking, and a homebound husband who has broken an ankle in a biking accident.

As a newish health nut, Paul has decided to battle through the pain of his broken ankle rather than taking the prescribed painkillers and one day Sylvie decides to take one of his pills. Just this once, she'd like to feel a little lighter. The pill makes her feel relaxed, happy, and less stressed. It even makes her kinder to the people around her. So, she starts taking one a day and then two. It doesn't take long before she's hiding the pills and then stealing to keep from having to stop taking them. While she's sinking into addiction and spiraling out of control, her new attitude actually seems to be a good thing from Paul's perspective. But, when Sylvie can no longer bear the thought of doing without the pills, can she stop taking them? Or, will her family find out and intervene?

Recommended - Unputdownable. at least for this reader. An easy read with great flow, nicely paced, which is told from three separate points-of-view: those of Sylvie, Paul, and Teddy. While I was slightly surprised by some errors (bearing in mind that I have an Advance Reader Copy) that I tend to think of as typical of newer writers, which Zoe Fishman is not, they were blips. I just had to know what was going to happen with Sylvie and stayed up way too late finishing the book. There's also one possible research flaw that I consider significant. But, again, because I found Invisible as Air so gripping, I only knocked off a point for the things I found questionable.

I think it's worth adding that Invisible as Air could be triggering for anyone who has lost a child to stillbirth as it really digs into the lasting grief felt by each of the family members and how they responded to it.

I received a copy of Invisible as Air from HarperCollins in exchange for my unbiased review. The paperback has some extra features: a conversation with the author, reading group guide, and information about other books by the author. My thanks to HarperCollins!