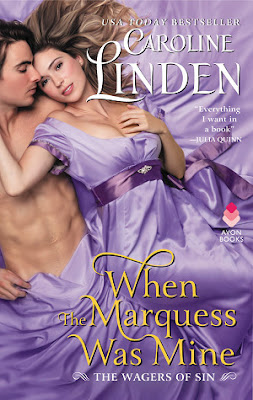 I have not read the first two books in The Wagers of Sin series by Caroline Linden and this book is the third, so the first thing you need to know about When the Marquess Was Mine is that it absolutely stands alone beautifully. I was quite surprised to find out it's the third in a series. There was never a sense that I was missing any backstory or important information about any of the characters at all. The second thing you need to know is that I loved this book so much that I was thinking about rereading it while I was still in the midst of reading, which is always a sign I'm especially loving a book. It's unusual for me to feel that way about a romance novel.

As When the Marquess Was Mine opens, a group of men are partying and gambling. A man who does not belong to this particular group of friends ends up gambling with them and losing everything he wagers. But, he's determined to win it all back so, against the advice of everyone present, he decides to wager his home. He loses it to the Marquess of Westmorland (who goes by either "West" or "Rob").

The gambler, Charles, writes home and warns his wife, Kitty, that West may come up to Derbyshire and that he should absolutely not be allowed onto their property. He doesn't bother saying that the Marquess has won the title to his home (his only property) in a game of cards, but instead claims that he's been cheated out of their home. The letter is emphatic enough for his wife to take the threat seriously. Georgiana is visiting Kitty and she's acquainted with the Marquess. She knows him as a man who has been known for making frequent, cutting remarks about people, including herself.  Meanwhile, the Marquess has loads of property and no interest in evicting a man and his family from their home. But, he wants to give the title back in person.

Here is where it gets really fun. Something terrible happens to the Marquess and he's badly injured. He has taken a severe blow or blows to the head and is found unconscious. Georgiana is out riding while he's being attacked, sees the attack, and insists that he must be brought back to Kitty's home (Charles is still in London). Because Georgiana knows the injured fellow is the man who holds the title to Kitty's house, she lies and says he's her fiancé, Lord Sterling, out of fear that Kitty wouldn't allow him to be tended to and he might die, otherwise. But, when he finally awakens, Rob has a bit of amnesia. He readily accepts the idea that he's engaged to Georgiana, although the name "Lord Sterling" doesn't ring any bells.

Will the Marquess regain his memory? If so, what will Georgiana do? When Georgiana finds herself falling for the Marquess, will she act on her feelings? What will the real Lord Sterling do if he finds out Georgiana has been nursing a man who is definitely not him? And, for that matter, why doesn't Lord Sterling write or visit and why has Sterling dragged out their engagement for two years? Is it possible he doesn't really love Georgiana?

Highly recommended - When the Marquess Was Mine is absolutely the best romance I've read, this year. There have been a couple others I loved, but there was just something deliciously fresh about the storytelling and the building friendship between the hero and heroine was nicely paced and believable. It wasn't all throbbing this and tingling that; there was a genuine growing affection in line with their attraction. Plus, Georgiana and Rob are incredibly likable characters and I cared about what would happen to them. I found Georgiana's honesty and forthrightness refreshing. Love it, love it, love it. I need to get my mitts on the first two in the series.

I received a copy of When the Marquess Was Mine from Avon Books in exchange for an honest review and goodness, what a wonderful discovery. I hope Caroline Linden has written a lot of books. I want to read them all. Many thanks to Avon!

Fiona Friday will be held on Caturday, this week.

Email ThisBlogThis!Share to TwitterShare to FacebookShare to Pinterest
Labels: Caroline Linden, highly recommended - a new favorite, historical romance, one in a series