No Judgments by Meg Cabot 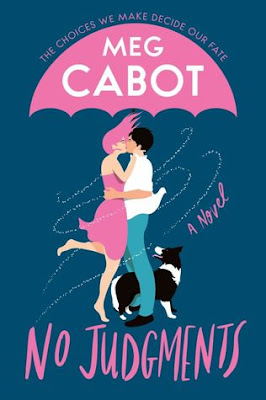 No Judgments by Meg Cabot is a fluffy romance set against the backdrop of a hurricane in the Florida Keys. Sabrina (Bree) left her home in New York after her boyfriend and mother failed to support her through two particularly difficult experiences and now she lives and works on the little island in the Keys where her family used to vacation.

When a Category 5 hurricane heads toward the Keys, Bree's wealthy ex and her mother both offer to help her escape in advance of the storm. But, Bree's cat can't travel and she's uninterested in getting any help from the two people who weren't there for her when she needed them most. Now, even though she's also on a mancation (like vacation, but a break from dating), Bree is frustrated to find herself falling for a local fellow named Drew who has a reputation as a lady's man.

Both Bree and Drew are stubborn. Bree plans to stay in her apartment, even after being told the building will undoubtedly flood due to storm surge since it's too close to the water. Drew is determined to ride out the hurricane in the home he's built on the beach.

When the hurricane has passed, Bree is stunned by the damage. And, when she finds out the person who was supposed to watch her neighbor's pets left without moving them to higher ground, she's horrified. Then, she discovers that a surprising number of people have left their pets behind but will be unable to return to the island for days. The task of taking care of people's pets is overwhelming. But, it turns out that Drew loves animals, too.

Recommended but not a favorite - Absolutely the right book for the moment. While it's not, in my humble opinion, Meg Cabot's best work and I had a lot of minor issues with this book, there's a lot that I liked about it. I liked the accuracy of the hurricane description (pre-, during, and aftermath) and the predictability of the romantic aspect. I was mostly in it for that predictability, as is often the case with romance. I also appreciated the mental break — no heavy plot, not too many characters to keep track of, nothing mentally taxing. The romance itself was nice but there was just something flat and lifeless about the storytelling in this book and I thought the descriptions of Bree when she was turned on were . . . eww. That could have been left out. The best thing about the attraction between Bree and Drew is the fact that the hero and heroine have a love of animals in common. If you're an animal lover, you'll definitely appreciate their mutual affection for animals and determination to care for all the abandoned pets on the island.

I received an ARC of No Judgments from HarperCollins in exchange for an unbiased review. Thank you!

Email ThisBlogThis!Share to TwitterShare to FacebookShare to Pinterest
Labels: an imprint of HarperCollins, Meg Cabot, recommended but not a favorite, romance, William Morrow