In Pain by Travis Rieder 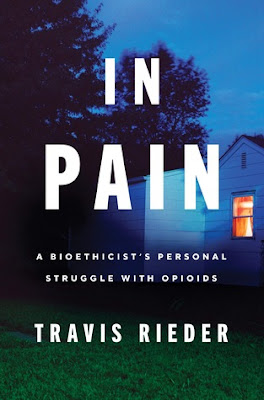 First the simple description, which I wrote immediately after closing In Pain by Travis Rieder:

A fascinating memoir and exploration of how we mishandle pain management in America.


And, now a deeper description:

In Pain is part memoir, part analysis. The memoir portion is the story of author Travis Rieder's personal experience with opioids after his foot was crushed and degloved (the skin almost entirely removed) in a motorcycle accident. His injury was so severe that he had to be heavily medicated to cope with the pain. But, he had one doctor who was a bit conservative about medicating him and another who came up with a non-opioid solution to cover the time between doses when he got "behind" the pain and was in agony for an hour or two while he waited for the next opioid dose.

After the surgeries, Rieder was on a heavy regimen of regular painkillers and he thought he was doing pretty well until one of his doctors disagreed. He shouldn't need that much pain medicine, anymore. But, out of all of the doctors he'd dealt with (including the one who helped him manage his dosages in the first place) not a single one was willing to work with him on tapering off his opioid medication so that he could learn to live with minor pain and the least pain medication possible. Not even a pain management clinic would take him. And, he wasn't an addict so he didn't technically belong in rehab. One doctor made a "tapering" recommendation that shocked me. I wasn't surprised when Rieder, upon following his advice, went through a miserable withdrawal. What surprised me was that he didn't slow it down. Instead of cutting out an entire dose every 4 hours (that's an example; I didn't write down the specific details), maybe he could cut out half a dose twice a day?

At any rate, Rieder was dependent upon the opioid medication he took but not addicted. And, here is where the meat of the book lies. What's the difference between dependence and addiction? Who is responsible for helping people who are dependent on to drugs taper off of them as safely and easily as possible? Why don't doctors seem to know anything about how to safely dispense or taper opioids? And, what can be done to keep people from literally dying by the thousands during the opioid epidemic? Is there a way to prevent needle-borne disease and accidental overdose? Is there a way to keep people in chronic pain from getting entirely cut off from painkillers and ending up in such agony that suicide seems the only solution?

Because Rieder is a bio-ethicist and works with doctors, there was actually no reason at all that he should have had to go through the horror of withdrawal without help. He had friends he could have turned to. But, Rieder mentions, because we think of addicts as people without will, he was ashamed of his dependence and it didn't even occur to him to reach out. Imagine what it must be like for people without the resources he could have called upon.

Highly recommended - I'm going to hand this book to my doctor, the next time I see him, and may even buy a copy or two to pass around. I am so impressed. The author mentions ideas that challenge our strict, puritan thought process. Needle exchange programs to keep people from getting HIV, for example, often make Christians cringe. "We're encouraging drug use!" they say. Rieder disagrees. If they're going to use needles anyway, why not make doing so safe? Non-opioid medicines that work equally well or sometimes even better than opioids (depending on the kind of pain) are withheld by hospitals because they cost more — opioids are cheap. Why allow hospitals to refuse the use of a medication merely because it will affect their bottom line?

Doctors need more training on how and when to dispense pain medication and how to taper people off of it. There's more. I'm babbling because I think In Pain is such an important book. He also talks about the fact that the worst of the opioid crisis has actually passed, and yet legislators are writing panic legislation that punishes people who actually need regular pain medication ("legacy" patients) for long-term conditions. This is true where I live. It ties the hands of the prescribing physician, threatening them with losing their license if they go over draconian prescribing guidelines.

I received a copy of In Pain from HarperCollins in return for my unbiased review. If I could, I'd pass it out to every doctor in the country; at the moment it's a new release and a bit on the expensive side, but I will at least buy one copy to pass around and hope it comes back to me. Know any billionaires in need of a mission? I've got one for them. My thanks to HarperCollins!

©2019 Nancy Horner. All rights reserved. If you are reading this post at a site other than Bookfoolery or its RSS feed, you are reading a stolen feed. Email bookfoolery@gmail.com for written permission to reproduce text or photos.
Posted by Bookfool at 11:24 AM