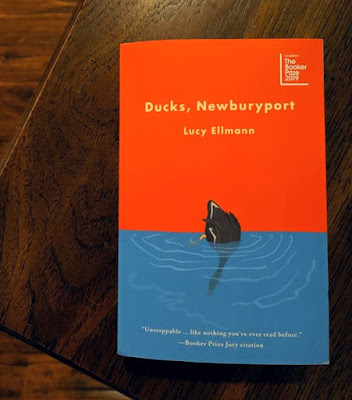 
It was not that long ago that such a thick book (nearly 1,000 pages) would have intimidated me so thoroughly that I wouldn't have even remotely considered tackling it. I think maybe Don Quixote has made me cocky — or, at least, broken the spell. At any rate, I'm looking forward to Ducks, Newburyport but I will not read it till after I've succeeded at reading Gone With the Wind. Priorities.


The Rent Collector (link to review, below) is my F2F discussion book for September and I went ahead and reviewed it while it was fresh in my mind, rather than waiting till after the discussion. I enjoyed it and I'm sure the discussion will be a good one. Collage and Construction (an instructional art book) is an old library sale find that I've had for ages, published in 1970. I found it while looking for books to donate and since it was only 62 pages long, I decided to just give it a quick read before donating. It's ugly and water-stained but the content was fascinating! I finished After the Flood at a little after midnight, last night. It's an interesting read but it's fairly slow of pace (apart from some heart-pounding action scenes) so I was just ready to be done with it, to be honest, but don't get me wrong . . . I enjoyed it. More on that, soon.


Since I just finished After the Flood, I haven't started my next novel. I'm not far into the Summary of the Mueller Report. One nice thing about it, though, is that the author/professor who abridged the report totally eliminated all of the footnotes. Much appreciated. I think they're important, at times, but if you just want an overview not having to constantly look back and forth makes it a lot more readable.

I watched a movie, this weekend! It was an old one, but other than The Royal (which I also viewed and finally finished), it's one of the few things I've seen on TV in a while. The movie is Three Days of the Condor, a 1970s-era movie starring Robert Redford and Faye Dunaway. It has me thinking I might want to have a Robert Redfordathon. There are quite a few Redford movies that I love.

Out of curiosity, I just looked up Three Days of the Condor and found that it was released in 1975 and has an 86% approval rating at Rotten Tomatoes.

As to that newly-updated review policy, between that and my book-buying ban (which has lasted at least 10 days — I know, but it's hard, people!) there should be relatively few books to photograph in the near future. And, at some point I'll be going on an extended blog break, which will mean shuttering the blog for at least a month, possibly much longer. I'm not thrilled about it but you do what you have to do and I have no control over what's to come. I'll let you know what's up when the time comes. At any rate, till then it'll be business as usual but I'll just be working from the ARC backlog.

©2019 Nancy Horner. All rights reserved. If you are reading this post at a site other than Bookfoolery or its RSS feed, you are reading a stolen feed. Email bookfoolery@gmail.com for written permission to reproduce text or photos.
Posted by Bookfool at 11:01 AM