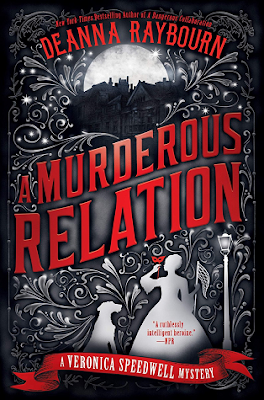 In A Murderous Relation, Veronica and Stoker have been called from Cornwall to London. One of Queen Victoria's grandchildren, Prince Eddy, is caught up in what could be a tremendous scandal. Veronica and Stoker are tasked with retrieving a gift given by Eddy, aka Prince Albert Victor, to someone of ill repute. Meanwhile, London is being terrorized by a vicious killer, not yet known as Jack the Ripper. Are the two related?

OK, confession. It's 1:00 AM and I have not finished A Murderous Relation, so I'll tell you what I think of it, so far, and then return to finish up, later.

I love the main characters, as I did in the first Veronica Speedwell book I read, A Dangerous Collaboration (#4 in the series). Veronica is smart, clever, and knowledgable. Stoker is a little more distant in this book than he was in the last and I'm finding his diminished role somewhat disappointing. But, every now and then he'll say something that makes me smile and I love the interaction between the two of them.

However . . . and this is a big however . . . I absolutely hate the setting of this book. A Dangerous Collaboration was set in a castle on an island off the coast of Cornwall and it was partly that setting that made the book so much fun. In A Murderous Relation, Veronica and Stoker are undercover to try to find the gift given to Aurore, the woman whose home is like a playground for perverts (she doesn't like to think of it as a brothel). And, that is so not my thing. I anticipated much less of the . . . scenery, I guess you could say? I didn't realize so much time would be spent on descriptions of people doing icky things. I'm finding that it creeps me out so thoroughly that I keep setting the book aside. I haven't decided whether or not I'll finish it, so I'm going to leave this review open-ended and report back on Friday. If I decide to abandon the book, I'll say so. If I continue, I'll finish with a recommendation line. I'm going to sleep on it.

Fiona Friday will be moved to Saturday to make room for my Friday update on the book.

I received a copy of A Murderous Relation from Berkley Books for review. Thanks! My apologies for the delayed ending to this review. I shall return.

It's Friday morning and I made my decision to continue reading A Murderous Relation, yesterday, after sleeping on it. I decided I liked the characters too much to give up on them merely because of the location in which the storyline had ended up. And, I also figured they couldn't stay in the brothel, forever. Excellent decision! Not long after I began reading, Veronica and Stoker discover a body, try to escape from the brothel, and things get really exciting and tense (the way I like them). At that point, the pages began to fly. I don't want to give away any plot points but a character from a previous Veronica Speedwell book (which I have not read) shows up every bit as villainous as before but this time with an unexpected sidekick.

Highly recommended - If you are squeamish about scenes in a brothel, I recommend a little skimming to get past that bit, which went on longer than I was able to tolerate on Wednesday evening but ended quickly, after I picked the book up again. However, I wouldn't skip anything because the story builds on each incident and slowly becomes a little more complex than just rescuing a Prince from his self-made scandal by stealing a jewel. It also becomes much more dangerous, to the point at which the question becomes, "Will anyone get out of this alive?" And, then, other things happen. At any rate, there are some heart-pounding action scenes, which I love, and Stoker's role picked up enough to satisfy me. I closed the book thinking, "I need to go back to the beginning of the series." I like Veronica Speedwell and Stoker, the way they sort of spin around each other without landing (Will they? Won't they?), the vocabulary (always looking things up while reading this series, including photos of historical characters who make appearances), and the time period. Loads of fun and I'm so glad I returned to the book.


©2020 Nancy Horner. All rights reserved. If you are reading this post at a site other than Bookfoolery or its RSS feed, you are reading a stolen feed. Email bookfoolery@gmail.com for written permission to reproduce text or photos.
Posted by Bookfool at 1:13 AM

Email ThisBlogThis!Share to TwitterShare to FacebookShare to Pinterest
Labels: Berkley Books, Deanna Raybourn, historical fiction, mystery, one in a series