Such a Fun Age by Kiley Reid 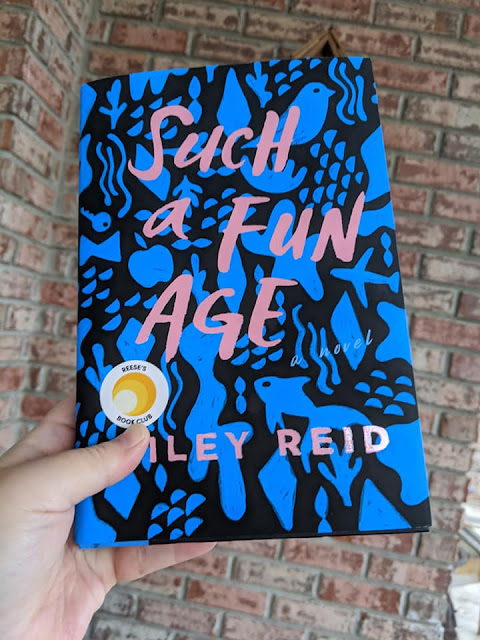 A little background on the purchase of Such a Fun Age by Kiley Reid, up front. I started out reading a different novel about a black woman and her son whose father was white for Black History Month and then a friend who'd just read it said, "Read this instead," about Such a Fun Age. She didn't say that to me, personally; it was just a general announcement that she'd read both and one story was more authentic than the other, in her opinion, which she made on Facebook.

I was already reading the one she thought was the lesser and enjoying it but not far into it at the time of my friend Amy's post. She said the difference between the two was night and day, that the one written by a white woman didn't have the ring of authenticity but Such a Fun Age, by a black woman, does. I thought it would be fun to compare the two as Amy had, so I bought a copy of Such a Fun Age. I'm not mentioning the title of the other one because it eventually became a DNF and I can't find it to quote from. I figure I shouldn't pick on the author for no good reason if I can't point out the specific problem I had with it.

At any rate, I bought a copy of Such a Fun Age because I trust Amy. Then, about 1/3 of the way into the other book, there was a sentence that I found offensive and inaccurate about the son having both black and white genetics and mostly looking black but he didn't have to worry about his blackness because he lived this cushy middle-class life. That may have been disproven in the story, but by that point I was frustrated with the characters. They felt more like caricatures than well-rounded humans to me and I just couldn't buy into the storyline at all. It was frustrating me.

Finally, after about 5 days of reading for a little bit and then setting the book aside out of inattention, I decided to give up on it for good (I was a little more than halfway into it) and a few days later I started on Such a Fun Age, mostly out of curiosity due to Amy's thoughts but also because I saw Kiley Reid on Trevor Noah's show and she was utterly fascinating. She said she likes cringe-y scenes and I wanted to see if her book made me cringe.

Emira Tucker is 25, black, and has a bachelor's degree but she's a babysitter working for the very white and upper class Chamberlain family. She is aware that she should probably do something different; she's about to fall off her parents' insurance when she turns 26 and she's got skills. But, she's just not sure what she wants to do or how to go about it. She adores her little charge, Briar, who is precocious and a little hyper-sensitive. As much as she knows she should probably move on, she loves Briar as if she were her own and the idea of leaving her is unbearable. There's another child, a baby, but Briar's mom usually keeps the baby with her and ignores Briar.

Alix Chamberlain is a go-getter who is used to having everything her way. She married well and lives in a fabulous house but she's been thrown off-kilter by the family's move from New York City to Philadelphia. She misses her friends and her packed schedule. As an "influencer" she has built a huge following and she knows she can keep it up from her new home. But, the move has made her sluggish and she's so unsure about what her change of location will do to her brand that she's still pretending to work from New York. She has a book deal but that's going nowhere, as well. And, then her world is upended when her babysitter is accused of kidnapping Briar.

The inciting incident in this book happens when a window is broken in the Chamberlain home because Alix's newscaster husband said something that's been construed as offensive (he claims he didn't mean it the way it's being taken). Alix calls Emira, who is dressed for a party, and asks her to take Briar away from the house until the police have left. It's while Emira's out with Briar at a grocery store that someone accuses her of kidnapping the child. There, she also meets a man named Kelley, whom she begins to date, eventually. But, there's something weird about both the way Alix and Kelley treat Emira, like she's some sort of token they should be proud of.

Highly recommended - I love how realistic Such a Fun Age feels. The characters ring true to me in a way that makes me feel both uncomfortable and, at the same time, nod along at how much I can relate to various aspects I'd rather not relate to. I understand, for example, what it's like to be an adult who feels like you're not doing adulthood right, that you ought to be doing something else, earning better money, finding your place in the world. That unsettled feeling that Emira has . . . I don't have that anymore, but I remember it well. My plans were rocked off their foundation when I was quite young and it took me a very long time to figure things out.

There were brief moments that I wanted the story to move a little faster and I never did buy that the object thrown into the Chamberlains' window would have broken the window unless there was already some damage to the glass, but Such a Fun Age tackles some subtle acts of racism in a powerful way and it's just a good story. And, yes, it did make me squirm a time or two.

I think it's worth mentioning that while I bought Such a Fun Age with Black History Month in mind, I'd heard a lot about it and probably would have bought it eventually, regardless of the time of year. I also thought it would be a great book for discussion and may mention it to my F2F group leader when I return to meetings (which, I presume will be suspended till the pandemic is under control).


©2020 Nancy Horner. All rights reserved. If you are reading this post at a site other than Bookfoolery or its RSS feed, you are reading a stolen feed. Email bookfoolery@gmail.com for written permission to reproduce text or photos.
Posted by Bookfool at 2:29 PM