Freedom is a Constant Struggle by Angela Y. Davis 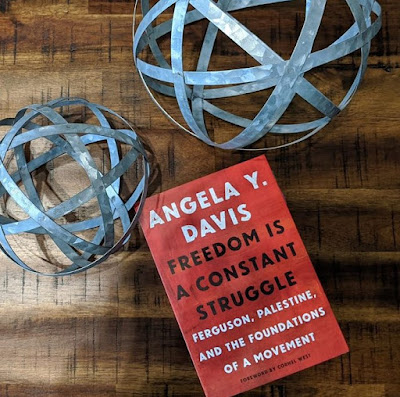 Racism, as it has evolved in the history of the United States, has always involved a measure of criminalization so that it is not difficult to understand how stereotypical assumptions about Black people being criminals persist to this day. Racial profiling is an example. The fact that driving while Black can be dangerous. Recently, one of the trending Twitter conversations had to do with "criming while White." A whole number of white people wrote in and described crimes they had committed for which they were never suspected, and one person pointed out that he and a Black friend were arrested by the police for stealing a candy bar. The cop gave the white person the candy bar, and the Black person was eventually sentenced to prison.

I chose Freedom is a Constant Struggle as my read for Black History Month and I'm obviously a bit late getting around to talking about it so it's not as fresh in my mind as I'd like it to be, but I remember enough to say a few words about it.

Freedom is a Constant Struggle is a set of speeches and interviews about the intersection of racism in the U.S. and oppression in other countries. The author is a well-known activist who travels the world speaking about oppression, the history of oppression and ways in which large corporations contribute to the problem, why oppression is profitable, and how prison is used to oppress certain populations, among other things. She offers alternatives and ideas for change.

I like these words on what keeps Angela Davis going:

[...] I don't think we have any alternative other than remaining optimistic. Optimism is an absolute necessity, even if it's only optimism of the will, as Gramsci said, and pessimism of the intellect.

One of the things Davis talks about quite a bit in Freedom is a Constant Struggle is the private prison system and how profit-making leads to a higher level of incarceration. I remember the Obama administration had started working on closing down private prisons for exactly that reason but I've since read that the current administration is doing the opposite, allowing for more private prisons and expanding their reach by using the same corporation(s) who run prisons to take on housing of immigrants. The book was published in 2016, so it's a little outdated in that regard but you can fill in the blanks of what's happened with a little reading up on the Internet. It's still got a lot of valuable information.

The only thing that I kept puzzling over was the fact that Davis is for banishing imprisonment entirely. As in no prisons, whatsoever. I kept thinking, "So, what do you do with the hard-core criminals, those who committed violent crimes?" That was not addressed and it's something I would love to ask the author, if I were given the opportunity to talk to her.

Highly recommended - A very thought-provoking book, worth reading and discussing. I was familiar with the name Angela Davis but I didn't realize she was a Black Panther, although it's clear from the reading that she's been an activist for a very long time. I'd actually love to read more about her. She is highly educated and I often found myself thinking, "This is just a bit above my intellectual level" but it's not at any point unbearably dry; it's very readable but with moments that required extra concentration. The reading made me want to get to my book about the Black Panther Party, which I also bought for last year's Black History Month. I may go ahead and read that, this year, if I can fit it in. I would also love to reread Freedom is a Constant Struggle with a group, some time. It's ripe for discussion.


©2020 Nancy Horner. All rights reserved. If you are reading this post at a site other than Bookfoolery or its RSS feed, you are reading a stolen feed. Email bookfoolery@gmail.com for written permission to reproduce text or photos.
Posted by Bookfool at 12:24 PM