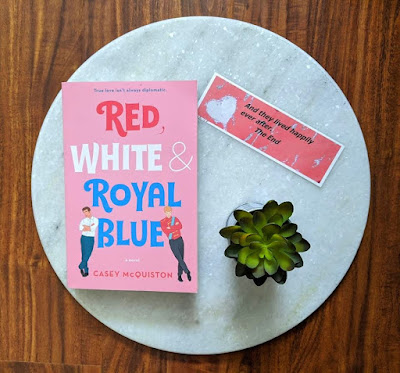 I bought my copy of Red, White and Royal Blue by Casey McQuiston on the advice of my friend Alyce using the last of the Amazon card she sent me (thanks, Alyce!) It's the story of an American president's son, Alex, and a British prince named Henry who fall in love. But, it's election season and the president's campaign could be thrown into disarray if their romance becomes public knowledge.

One thing I loved about Red, White and Royal Blue was that Alex doesn't actually realize he's bisexual. Is this plausible? I think so. Societal expectations can convince us we're something we're not. At any rate, Alex has dated women. One of his best friends is a former flame and the two of them will occasionally pretend to be an item just to toy with the press. He had one brief, gay interaction in the past that he thought nothing of. Now, it's become apparent to him that he is not just a fan of the prince but massively attracted to him.

Another thing I loved was the fact that the president is a divorced woman. Now, there we seriously sink into fantasy territory because America does not forgive women for having any flaws at all. Husband had an affair? It's the woman's fault. Stay with him? What's wrong with you, woman? Leave him? You made vows before God and you're breaking them. And, we know any flaw at all is enough to keep a woman from the presidency. The author admitted that she chose to create a fantasy world that fit her own political desires.

There were a few things I didn't like, as well. The first half of Red, White and Royal Blue bored me a bit, I confess. It was cute. I liked the plotting around the romance itself, but there were too many sex scenes for my taste and not enough relationship building, in my humble opinion. I liked both the main and side characters a lot, though, and the dialogue is wonderful. And, the second half is meatier, about facing one's truth, how a family scandal can rock an election, whether or not being in an LGBTQ relationship should even be a scandal, the importance of family, the meaning of love, finding your place in the world (even if it means plans change), and how crucial it is to have people in your life who believe in you. Lots to think about.

Recommended - There was obviously plenty to love about Red, White and Royal Blue and in the end I was really quite moved. There's an impressive complexity to the story that isn't always something you see in romance, since it has that political side, and so many interconnecting themes about love and family and life. Plus, I enjoyed the humor.

©2020 Nancy Horner. All rights reserved. If you are reading this post at a site other than Bookfoolery or its RSS feed, you are reading a stolen feed. Email bookfoolery@gmail.com for written permission to reproduce text or photos.
Posted by Bookfool at 2:07 PM