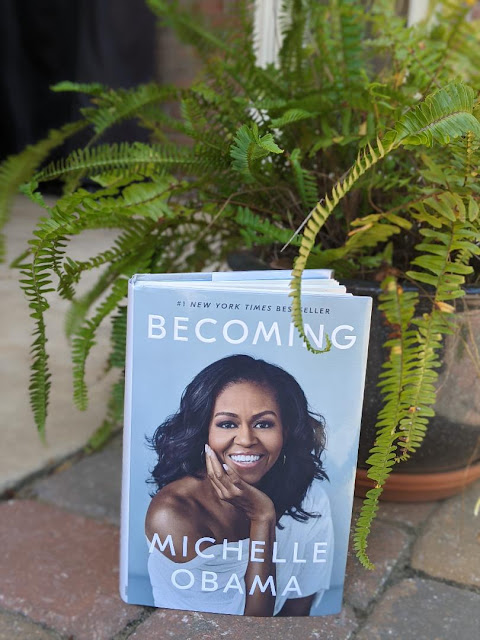 I bought Becoming by Michelle Obama on a whim. It's been much discussed since its release and I've consistently heard nothing but good. But, not being a huge fan of memoirs, I resisted buying it or checking it out. Without bothering to find out, I think I must have assumed that the book was about her years as First Lady.

Well, I was wrong about it on all counts. First, it's the story of Michelle Obama's life, from how protective her brother was when she was a baby to her school life and how her jobs evolved, through to her years as First Lady. She talks about how her parents were never able to buy a place of their own so they lived in the cramped second floor of her aunt and uncle's home on the South Side of Chicago. She talked about the exodus of white people from the area and the schools she attended. She talked about her parents' rather laid-back assurance that their children could and would succeed and how they devoted their lives to making certain they had all the opportunities required to do so. She spoke about the schools she attended, the discouragement she ignored, how she met Barack Obama, and a little about his life.

She shared her struggle with infertility and her frustrations and insecurities in life and in the working world. And then, of course, came the political years. You don't have to read very far into Becoming to find out Michelle Obama will never, ever go into politics. She went there as a supportive spouse but her family, especially the children and how their father's busy political life (and later life in the White House) would effect them, was always her main concern. I'd heard that her mother stayed in the White House and that relates to the way family permeates her story. She didn't want her children to miss out on having their grandmother near during their formative years, so she moved her mom into the residence. Michelle's mother kept a low profile and wouldn't let the Secret Service follow her around, so I understand now why I was never entirely sure that rumor about her mom living in the White House was true.

I particularly enjoyed learning about how life in the White House works, what the current president pays for and what's provided, and the little details like how much work (on the part of the Secret Service) goes into stepping out on the balcony to get fresh air.

I think everyone I know has read Becoming but if you haven't, it's worth the time. I already admired Michelle Obama as a First Lady but I found out she did even more than I was aware of. A lot more, actually. She was about as close as you can get to my hero, Eleanor Roosevelt. Both were indefatigable in their pursuit of programs to improve the lives of people both in the US and around the world.

Highly recommended - Well-written and so heart-felt that you can't help but find yourself immersed and unwilling to put the book down till you must. At least, that's how I felt. Becoming is long at around 400 pages but it's quite a fascinating read. I've always known there are various reasons for the different cars in the presidential motorcade but she describes what each of the cars carries, what it's like to live in the White House, the challenges that a First Lady faces, how Barack Obama's days went, what effected him most deeply, how they made various decisions about their children, and which former presidents and first ladies were the most helpful to her. It's funny that a book I thought I would find so-so charmed me so thoroughly.

Here are my favorite failed attempts to pose Becoming with Izzy. I like it when I manage to get her to put a single paw on the cover of a book but she just wanted to climb on it, the day I was trying to get an Instagram shot. 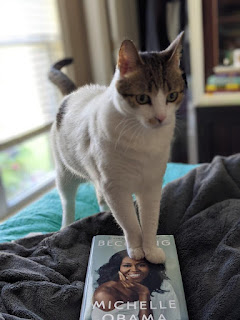 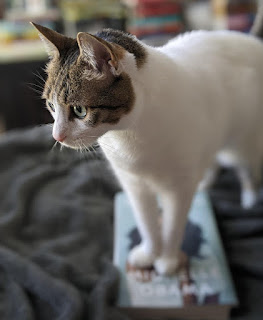