The Witch of Willow Hall by Hester Fox 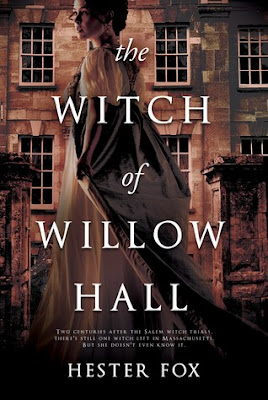 My friend Susan asked if I'd be interested in borrowing her copy of The Witch of Willow Hall by Hester Fox and I jumped all over it. A book with "witch" in the title for October reading? Yes, please!

The Montrose family has had to flee Boston after a scandal made them notorious and they became social pariahs. Now living in what was meant originally to be their summer home, Lydia, Catherine, and Emeline must adjust to life in the country, with only a small village nearby. The house is new, yet Lydia finds herself hearing strange sounds and seeing people who shouldn't be there while young Emeline claims to be playing near the pond with a little boy nobody else can see. Are there ghosts nearby or is there a genuine reason for the things the girls are seeing and hearing?

Meanwhile, Catherine is determined to find someone to marry, even if it means interjecting herself in the growing relationship between Lydia and their father's business partner, a young man with a mysterious past. And, Lydia finds out that she has a secret of her own. Unbeknownst to her, she's inherited something from the ancestor who was killed in the Salem Witch Trials. She's a witch with special powers.

Lydia's powers are a surprise to her and she can't save everyone. But, when death and danger threaten the Montrose family, Lydia discovers that she has a greater ability to protect her family than she could have imagined.

Highly recommended - I could not put this book down. It was a cold, rainy day when I picked up The Witch of Willow Hall, absolutely the perfect weather for reading an atmospheric book. I read somewhere that The Witch of Willow Hall is Hester Fox's first book but I don't believe it. First published book, maybe. Her writing is mature and often so stunning I found myself rereading sentences. I doubt it's anywhere close to being the first thing she's written.

Note on the spookiness level: If you like to be absolutely terrified, this isn't the right book. It's a slow, gentle sort of ramping up of fear of what will happen as things grow worse. I liked it because I'm prone to nightmares and it didn't give me nightmares at all, although I did literally get a shiver up my spine, a time or two.

Also, it's worth mentioning that the scandal that drove the family from Boston is, in fact, genuinely scandalous. Often these books with a secret that's held back lose a little something when you find out the scandal or secret is . . . meh, whatever. Not so in The Witch of Willow Hall.