None of these books felt like they needed a page of their own but after writing the mini reviews, I find that I wrote more than expected about all of them. Sorry about that. Bit wordy. 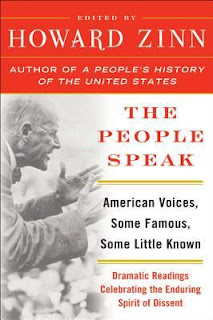 I'm not going to repeat all the subtitles on this book and just leave it big enough for you to read them. The People Speak, edited by Howard Zinn, is a slim book of readings that were dramatized by well-known people at a celebration of the anniversary of Zinn's A People's History of the United States. I have not yet read the original book but figured this was a way to dip into it and get an idea of how Zinn views history after A People's History of the United States was panned by our current president.
Each reading has an introductory part and then a writing or speech from the book, which apparently uses primary source documents. Zinn takes the actual words of either the oppressed or the oppressor, giving the reader a clear viewpoint of how those who suffered did so because they had no voice.
The most glaring and horrifying example, to me, was a letter by Christopher Columbus in which he describes the Arawak natives of Hispaniola as generous, well-built, handsome, and unfamiliar with weapons. His conclusion: "They would make fine servants. . . . With fifty men we could subjugate them all and make them do whatever we want." He did more than that. He wiped them out entirely.
Recommended especially if you want to get a taste of Zinn's way of viewing history without diving into the longer book. I'm looking forward to reading A People's History of the United States but I have quite a few other nonfiction titles ahead of it in the queue, so it was nice to at least get a peek at what I'll be getting into. 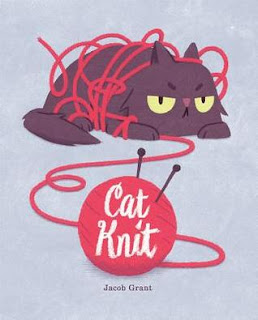 Cat Knit by Jacob Grant is a picture book about a cat (Cat) with a human (Girl) who is into knitting. When Girl brings home a ball of yarn, Cat finds that it's a delightful toy and has a great time playing with it. Then, Girl takes it away and turns it into something entirely different: a sweater.
Frustrated with the new shape of his old toy, Cat wriggles out of his sweater with the help of a branch. But, it's snowy and cold outside and once that sweater is off, Cat becomes aware of just how nicely it suited the purpose. He decides it's OK to be friends with Yarn in its new form.
Finally, Girl brings home several more colorful friends and the final image is one of Cat wearing not only his new sweater but a hat and booties. The expression on Cat's face is golden.
Highly recommended - There are few words in Cat Knit and simple but expressive illustrations of the cat. I loved it and I'm glad I happened across this book and bought it on a whim. It'll be a fun one to read to the grandkids when I see them again. 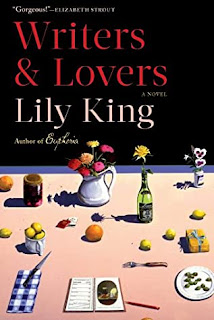 Writers and Lovers by Lily King is a book that I've been looking forward to reading since its release, mostly because I was so completely blown away by Euphoria. And, I liked it a lot but I didn't love it. Maybe my expectations were a little too high.
It's 1997. Casey has had a crushing experience with a lover and lost her mother. She has been working on a novel for years. To support her writing habit, she's living in a moldy garage apartment that used to be a potting shed and working as a waitress in a fancy restaurant. Casey begins dating two different men but each comes with his own complications.
I'm going to stop there. There are some other things going on, like the fact that Casey can't pay her bills even while living in a crappy little hovel, but I think it's worth saying what I liked and didn't like and leaving it at that.
What I loved: Writers and Lovers could easily be used as a lesson in writing. While Casey is finishing her novel and then pitching it to an agent, you get a very good look at the craft of writing. I also liked the realism of the love triangle. It didn't feel manufactured. In fact, I was certain that Writers and Lovers is a fictionalized account of the author's own experience and when I looked her up, I found that I was likely correct. Maybe the countries she lived in were different but it sure seemed like there were some parallels.
What I disliked: There were times I had no idea what she was talking about when Casey was at work — and I've been a waitress. I guess waiting tables isn't the same across different types of restaurant. There was also a picky detail about a health crisis Casey went through that ticked me off because it was just wrong; I've experienced it and that's not how it works. Again, I think she has likely had a similar experience but she just didn't look into how that particular thing would be handled. It's a little harder to write off mistakes when you've been through what's written wrong and know it would be pretty easy to find out the details.
I read Writers and Lovers specifically to discuss it with an Instagram friend. She liked it a lot more than I did. We have both written fiction and appreciated the technical details about writing. When you write fiction, you will often hear that it's self-indulgent to write about writers; we'd both heard that advice. But, we agreed that she handled the characterization of a writer better than most and it didn't feel annoying in any way. The writing aspect was quite informative.
Recommended, but not a favorite