The Wreck by Meg Keneally 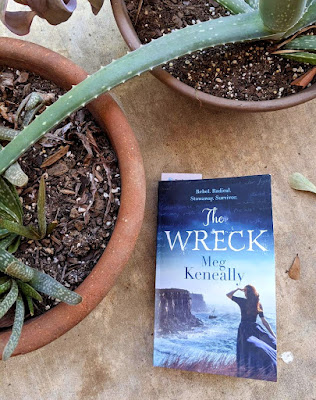 I read about The Wreck by Meg Keneally on Marg of Adventures of an Intrepid Reader's Instagram feed (Instagram is becoming a major influence for me, in recent months). The cover caught my eye, at first, because we visited a spot on the Australian coast where a shipwreck took place. It was not the same location as that in which the wreck of the story takes place and the circumstances in The Wreck are fictional but I liked the idea of reading about someone who was the lone survivor of a shipwreck and how she survived.

As it turns out, much of the book is about what happens before the main character even goes aboard a ship. Sarah McCaffrey's family has fallen on hard times since machines made the spinning and weaving her parents did for a living in Manchester, England obsolete. Then, tragedy strikes when her entire family attends a peaceful protest.

Angered by the senseless murders they've witnessed and the starvation they've both experienced and observed, Sarah and her brother move to London, where they join rebels who plan to participate in a dangerous plot.

****Possible spoiler warning: Please skip down to the recommendation line if you're concerned about the potential for learning a bit too much about this book before reading. ****

When plot is foiled, Sarah has no choice but to run. She hides out on the ship of a sympathizer and then ends up traveling to Sydney, Australia. But, near the end of her journey, the ship crashes into the rocks of a cliff outside Sydney Harbour.

Alone again, now in Sydney and living under a new name, Sarah is fortunately taken in by a wealthy woman and given work. But, when the truth of her past comes out, what will happen? Will she be hanged as a traitor or protected by those who have helped her in the past?

Highly recommended - It took me a little while to get into The Wreck because the beginning part was not quite what I expected, but it was a fascinating piece of history (the peaceful rebellion that ended up in a slaughter) and once I adjusted to this important background I couldn't put The Wreck down. I started it one night and then spent hours reading on the patio and finished it the next day. I liked Sarah and cared about what would happen to her. Her life is harsh but she's a survivor.

The author talks about the various pieces of history that she drew from and her inspiration in notes at the end of the book, which I appreciated because till then I didn't know what was factual and which parts were Sarah's fictional story alone. In the end, The Wreck was not only a fabulous read but a learning experience — my favorite kind of historical fiction. I will be looking for more books by Meg Keneally.