Running Out of Time by Margaret Peterson Haddix 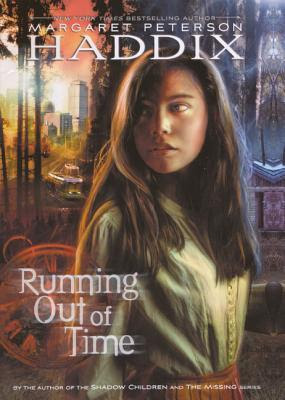 I've been reading mostly backlist titles, in recent months, and Running Out of Time by Margaret Peterson Haddix is waaaay backlist, written and published in the late 90s but timeless. You'll especially appreciate it if you lived through the "modern" 90s time period. There are two time periods in this exciting middle grade book.

I will say . . . I so enjoyed not realizing what I was getting into that I recommend skipping down to the recommendation line if you're interested in reading this book and want to be totally surprised. I may have mentioned a few spoilers — or, at least, things that could spoil the reading if you want to go in totally blind. So, I'll add a spoiler warning. Notably, what I thought I was about to read was another pandemic book but set in 1840. I was so excited when I found out that was not what the story was about at all.

Quick synopsis for those who choose to skip the longer description: In 1840, diphtheria breaks out in Clifton, Indiana. But, nobody is able to leave for help. Jessie's mother knows the children will die if someone doesn't escape the confines of their village, so she sends Jessie on a dangerous trip to the outside world. Will Jessie be able to find help before it's too late?

WARNING!!!! There may be spoilers in this review. Please jump down to the recommendation line if you want to go into this book blind!!!!

In 1840, Jessie has spent all but two years of her life in a small village, knowing only that her father was unhappy in Pennsylvania before they arrived at Clifton, Indiana to live. She was two when they arrived and doesn't remember her previous life at all. So, when a diphtheria outbreak threatens her friends and beloved sister, she is shocked to find out that her life is not at all what it seems and that leaving will be dangerous.

But, she must leave if anyone is to have hope of survival. Because outside of her home, it's the 1990s. Her home is considered a living historical village and it's an investment for the owner. It suits his purpose to keep them isolated from modern life and nobody has been able to escape.

Jessie's mother is a former nurse. Early on in their life at Clifton they were able to get modern medications but over 10 years later the village's access to modern medicine and technology has been cut off, maybe to make the village more authentic? She doesn't know. All she knows is that diphtheria can be cured but she doesn't have the medicine, there are guards and fences that nobody has been able to get past and those who've tried have been punished. And, Jessie's mom no longer fits in her 1980s clothing. Jessie is their only hope.

Dressed in her mother's modern clothing from the 80s and carrying a bag of food and a phone number, Jessie sets off. Even when she escapes, there are constant dilemmas because nothing is the same as her home. Even a loaf of bread (in a plastic bag?) is confusing. Will Jessie be able to find the man whose number she's been given? Will she be able to stay safe in the modern world, where dangers lurk around every corner? When things go wrong, who will she turn to?

It's safe now! You can come out from behind the couch. No spoilers below.

Highly recommended - I loved this book! Jessie is a convincing character. Her confusion when she's confronted with the unexpected, her fears, and the manner in which she handles her dilemmas are all believable. In fact, they're so believable that I sometimes found myself kind of talking to the book, urging Jessie to do something different. This was definitely a 5-star read.

When I went to rate the book, I discovered that my dearly departed friend Tammy had also rated the book 5 stars. Aw, man. I miss Tammy. She was a big fan of middle grade and YA. Running Out of Time is a quick and easy read but it packs such an emotional punch that I do think older readers will enjoy it for the way it makes you think, if they're not annoyed by the age of the protagonist and the writing geared to middle graders.