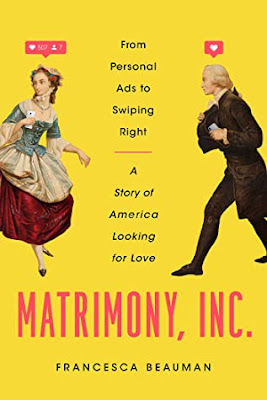 Matrimony, Inc: From Personal Ads to Swiping Right: A Story of America Looking for Love by Francesca Beauman is the story of the evolution of personal ads, the resistance to them (via editorial articles, in particular), and why they came into being and continued with only one fairly significant gap in the growing United States.

I found that the text was slightly clunky, which made for slow reading, yet the reasons people advertised for husbands and wives (and sometimes for less moral purposes) and how they played out were particularly fascinating.

Starting with personal ads in the 18th Century, when there were more men than women and the odd man without social connections advertised, the book continues through the years when large cities were exploding and people found it difficult to meet likeminded people of the opposite sex or were lonely after immigrating. And then, of course, there were the men who went West to farm or seek gold and found that the only way to obtain a wife was to advertise in the big cities and hope someone would be willing to travel to join them. Matrimony, Inc. finishes with a chapter on modern dating, from the Swinging Sixties (when marriage was not the objective) to computer programs like Match.com and apps like Tinder. The bulk of the book, however, is about newspaper personal ads.

I particularly liked reading the full story of a personal ad and how things turned out (when a marriage was long-lasting, especially), when available. Because few people kept journals or diaries in the early years of the country, there's often no way to know whether or not a match was even made, much less successful, via the earlier ads.

The author also talks about people who used the ads for fraudulent purposes, like asking numerous applicants for money for a train ticket so the advertiser and respondent could meet (and then just keeping the money), and serial killers who advertised and then murdered. Belle Gunness is a notorious female serial killer whose gruesome story is told in Matrimony, Inc. It gave me the shivers.

Apart from the writing style, I had only one complaint about Matrimony, Inc., and that may be amended in the final print version (my copy is an ARC): the personal ads reproduced in the book are mostly too small to read. This could have been worked around if the author had put the entire text of the ad below it (although it's nice to see them, even if you can't read them). She did often put excerpts in the text but seldom the entire ad. After a good bit of eyestrain, I decided to give up on trying to read them. However, I don't have access to the final copy so I can't say whether or not they enlarged the personal ads that are reproduced in the book.

Recommended - Very entertaining, if not the smoothest read. I enjoyed Matrimony, Inc. enough that I'm interested in Beauman's earlier book about British personal ads, Shapely Ankle Perferr'd: A History of the Lonely Hearts Ad 1695 - 2010. I imagine that, given the delightful British turn of phrase, there could be some very interesting material in that book.

Interesting side note: Francesca Beauman is the owner of Persephone Books in London. Cool.

My thanks to Pegasus Books for the review copy!