The Widow of Pale Harbor by Hester Fox 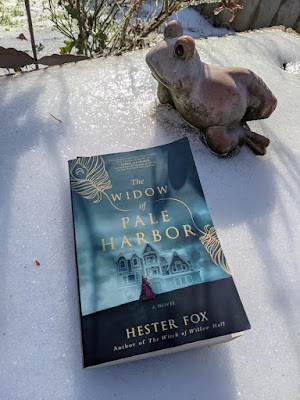 1846. Sophronia Carver was widowed 4 years ago. The townfolk of Pale Harbor think she's a witch and a murderer so she's exiled herself with only two servants and a part-time helper in her sprawling Maine home, Castle Carver. When bodies begin turning up, Sophy is blamed. But someone is dropping strange clues and threats on her doorstep, clues that only a person who knows literature can unravel.

Gabriel Stone's wife was deep into transcendentalism before her death and Gabriel feels obligated to become the man she wanted him to be. So he has taken a job as a minister in Pale Harbor, even though he knows little about the philosophy and is ill prepared to guide others.

When Sophronia and Gabriel meet, she is hesitant to let her guard down after an abusive marriage but he is smitten. When the small town has more than its share of bodies showing up and the threats against Sophy continue, will Gabriel be able to help figure out who is tormenting Sophy and killing the locals?

Meh - I don't know . . . I probably don't recommend this but I finished it so I'd say it depends on whether or not you like romance. After reading The Witch of Willow Hall by Hester Fox, I was hoping for another good Gothic read but The Widow of Pale Harbor was really a romance, first and foremost, and the mystery was a bit weak so it was slightly disappointing. I guessed who was guilty early on and the witch thing was a bit of a tease. Still, I liked The Witch of Willow Hall so much that I'll give the author another chance.

A friend sent me this copy of The Widow of Pale Harbor and we discussed it after I finished. We felt about the same. Her opinion: "The cover was the best thing about the book." I do love that cover.

Email ThisBlogThis!Share to TwitterShare to FacebookShare to Pinterest
Labels: Hester Fox, historical fiction, historical romance, neither recommended or not recommended