Remember Me by Lisa Takeuchi Cullen 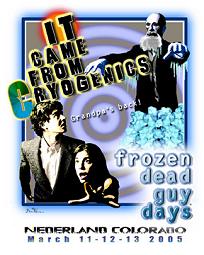 I've already mentioned this book in several other posts, so I'll just copy my "official" review and then babble on. Remember Me is an advanced reader that technically belongs to my husband, but I have sticky fingers when it comes to books and the hubby didn't mind. You can imagine he's, perhaps, used to such things? My intense curiosity led me to hop over to the computer and look up some of the things the author mentioned. The Frozen Dead Guy Days Festival, for example, grabbed my interest. I got online and found a t-shirt for the teenager. Shopportunity principles failed - I bought last year's version because it cost less. Whether or not the school system will consider it offensive remains to be seen.

An exploration of the traditions, trends, and future in American funerals written with humor and occasionally a bit on the gruesome side, Remember Me chronicles the author’s travels around the country to observe rites and rituals while learning what’s to come in the funeral industry.

An oddly fascinating, sometimes touching, occasionally downright weird chronicle written with a light-hearted flair but with the occasional “Ewww, gross” passage. The author traveled to a convention for funeral directors and crashed funerals, spoke to people with traditional and innovative businesses, and even described the funeral of her own grandfather in Japan. She joined in on scattering ashes from a plane with a homemade dispersal container, viewed the ceremony on-shore and the ocean burial of the deceased in an “eternal reef”, learned about turning human (thus, carbon-based) cremation ashes into diamonds, spoke to two men who have a mummification business and one who turns bodies into plastic, and attended the Frozen Dead Guy Days festival in Nederland, Colorado.

In general, the book was interesting but should not be taken as a detailed or scholarly analysis of trends, but rather a look at the variety of options now becoming available as Americans balk at the traditional funeral and burial process. The fact that the author had a new baby and often showed up at events and interviews with her child, usually in a backpack or stroller, added some light moments.

Son #2 has walked off with Urban Shaman by C.E. Murphy. Hey! He's not supposed to pull the same kind of snatching tricks as his mom. Serves me right, I guess, for turning my kids into avid readers. He's out of the house, at the moment, so I could just . . . yeah, think I'll tiptoe into the room and get it back. Hopefully, the attack cat lodged on his bed won't awaken.

Sneaky Bookfool on a Mission