The School Run by Sophie King 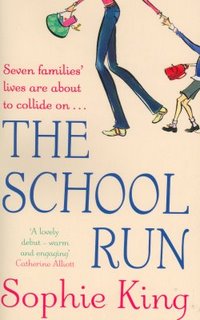 Meet seven very different people, all on the same route to school. Little do they know that over the course of one week the school run will have become a collision course, connecting their lives in more ways than one.

The School Run is a contemporary story that looks at the lives of seven adults during one very eventful week: three mothers and one widowed father, a woman who lost her only child, a teacher, and a French au pair. Each day, the characters cross paths in the run to the drop-off zone at St. Theresa’s School. All, naturally, have some sort of challenge to deal with. Is Harriet’s husband Charlie going to leave her? Will Kitty ever find a man to settle down with? Is there any possibility that Betty will spot the hit-and-run driver who killed her son? Why has Evie’s husband suddenly disappeared?

The School Run is a surprisingly well-written first novel. In form and style, it's vaguely reminiscent of The Reading Group by Elizabeth Noble, but with its own flair. Each section begins with a snippet of radio chatter and, most of the time, the name of the main character serves as a heading to let you know which story you’re dipping into as the author whips from one character to the next, overlapping both the radio bits and the individual stories. The School Run has a tremendous flow and, thus, makes for a very quick read.

However, seven main characters are just a few too many. For the first third of the book, I found myself flipping to the back cover constantly, in order to discern which character I was reading about; and, even then, the cover information was not enough because there were so many children to keep mentally sorted. Still, the book was entertaining and even a bit surprising around the last third. All the strands of the various storylines were thoroughly wrapped up and, overall, I found the book a satisfying read in spite of the proliferation of characters and a bit of predictability. Definitely recommended for those who enjoy light, contemporary British writing.
Posted by Bookfool at 3:35 PM