The Ghosts of Cape May by Craig McManus 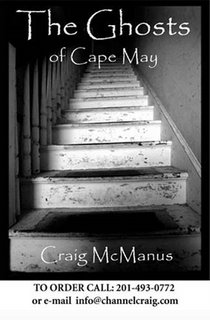 The Ghosts of Cape May is a nonfiction book describing the ghosts, spirits, and residual energy lingering in a number of Bed and Breakfasts in Cape May, New Jersey. Author Craig McManus claims to be both a psychic and medium (who channels ghosts or spirits, allowing them to "speak" using his vocal chords) as well as a paranormal investigator. As such, he has visited many of the "haunted" homes in Cape May to determine whether they were, in fact, haunted and, if so, by whom. The ghosts or spirits will often give him names.

And, then they sell him great land in Florida. Kidding, just kidding.

I'd call this a fun and educational book on the paranormal. Is it a lot of hooey? Well, you'd have to read and determine that for yourself. McManus considers this first book of his experiences with Cape May hauntings (a second has just been released) a primer in the paranormal. To that end, he has taken the time to expound upon the differences between ghosts (trapped in the ghost realm on earth) and spirits (who have gone on and will return to help guide ghosts to the next world, or sometimes to aid humans). There's even a glossary of paranormal terms in the back.

And, there are apparently plenty of noisy ghosts banging around in Cape May; the owners themselves are often eager to find answers to what is causing those mysterious footfalls or banging noises when nobody else is home.

McManus doesn't always have the answers. He records interviews with the management and staff of the places he visits, often capturing additional voices on tape (ghostly voices, that is; the reasoning behind ghostly voices on tape is explained). He takes photographs and sometimes captures "orbs" but is, himself, a bit skeptical that all orbs indicate paranormal activity as he knows that blobs of light can be indicative of reflection on a lens, as opposed to visual proof of energy coming from a non-human presence. He also verifies the names he's "given" by ghosts with historians. A ghost named Jonas worries about the boiler in a hotel that's being renovated. McManus can see him and describe his looks; he hears Jonas saying, "Don't hurt Schmitty". When a flashlight on the boiler shows that the boiler was made by a company with the name Schmidt and McManus is told the boiler is to be cut up and used as decoration in the new nightclub, things come together. Later, he recognizes the ghost when he sees a photo of Jonas.

There are some skeptics scattered throughout the pages. A wife hears noises and her husband shrugs and says they're nothing. McManus occasionally gets information from the ghosts and then can't verify it historically. But, it's surprising just how many little factoids he's able to confirm. He not only finds ghosts, he dispels myths. Some of the ghost stories he goes to investigate do turn out to be hoaxes and he clears those up. Sometimes McManus senses nothing, or at least very little. He's not afraid to say so.

Overall, a really fun read that made me want to book a ticket to Cape May for a stay in a nice little B & B, perhaps in the turret suite of a lovely Victorian home. The ghosts in Cape May are, for the most part, friendly. So, it's safe. Just don't call out the ghosts; that's apparently a big mistake. Go planning to give the ghosts their space. Or just read the book - a perfect Halloween read.