I have 15 minutes to come up with my Wahoo! moments because the husband walked in and announced that we're all going to stop what we're doing and work on Will's geography project at 7:00. I told him as politely as possible that I thought perhaps he ought to rephrase that statement. He winced and left the room. But, yeah, I'll be glad to help out on the project. I'm needed, if only to keep the hubster out of the helm seat. He likes taking over, but my son is perfectly capable of doing his own work with just a little guidance. 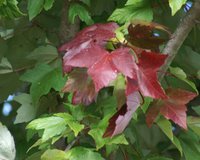 1. Signs of Autumn - Yes, it was 90 degrees out, today, but there are finally some indications that autumn is about to kick around the Deep South. Red leaves!! Piles of pumpkins!! A formation of migrating geese!! And, if I recall correctly it's supposed to cool off, tonight. The air conditioner is running, we're all walking around barefoot, and I wore flip-flops to pick my son up from school; but . . . red leaves!! Piles of pumpkins!! Migrating geese!!

2. Zingerman's Delicatessen in Ann Arbor, Michigan - Their #75 sandwich (aka, "Leo's Friendly Lion") and that totally sinful cocoa cake, in particular. Hubby was in the Detroit area on Monday and Tuesday, with a late flight home, so he zipped over to Ann Arbor to do some grocery shopping. He brought me a sandwich!! As if that isn't surprising and wonderful enough, my husband said, "I think I got the one you ordered last time we were at Zingerman's." Last time was in May of 2005. There's no way I would remember what my husband ordered, 17 months after the fact, but he was correct. Oooh, the melty cheese, the little slippery peppers, the guacamole oozing out. Pure heaven.

3. It's 7:20 and I squealed out of helping with the project, at least for now. Okay, yes, I did print out the photo of Russians wrapping their wheat harvest and sketched out the lower halves of their bodies to be cut and turned into figurines for Will's little diorama. But, I'm getting to play while the guys do the gluey, messy work. That's worth a giggle or two. 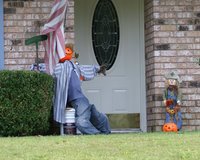 4. Nifty decorations - I've always wondered why Vicksburg seems a little Scroogey on the Christmas decorations and I think I've finally figured it out: they like Halloween better! There are elaborate scarecrows and such all over town. I'll try to get some better photos before it's all over. For now, a view of a friend's front door. 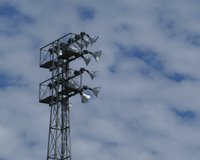 5. Clouds - We had a whopper rainstorm on Monday, as I mentioned, and then yesterday it got sticky, hot, and sunny . . . again. And, the change of weather gave me a whopper migraine. Today, no headache and enough clouds to keep the sun from being annoying. I've learned to love cloudy days.

Much later . . . It's 9:20, now, and I did have to sacrifice my computer for the cause--printing out photos of such exciting things as a McDonald's in Russia, for example. Really, it's pretty cool the way they placed this modern McDonald's next to a medieval gate. Everyone should have a medieval gate next to their McDonald's, don't you think? Or, maybe we should just start building nice stone gates and churches for the sake of creating beautiful things. I've always loved the look of old walls, buildings and bridges in Europe.

Reading News: None. Still working on Touched by Angels. I have no problem reading a Christmas book in October, obviously (or any other time, to be honest). Still periodically glancing at The Once and Future King and thinking . . . sigh . . . "I'm going to flunk my challenge." There's still time, though. We shall see.

Read On, Dudes and Dudettes!
Posted by Bookfool at 6:02 PM