Touched by Angels by Debbie Macomber 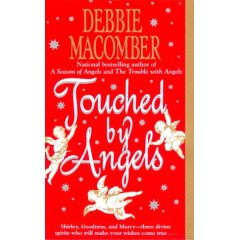 Touched by Angels is going to be a difficult novel to review because I have to admit that the writing is not anything worth jumping up and down over. The plot was just plain predictable. As there was romance involved in each of the individual stories -- and romance, by definition, must end happily, as well as tidily wrapped-up -- this was to be expected. I know about romance guidelines from many years spent hanging out with romance writers and it doesn't bother me, provided a little romance is what I'm in the mood to read.

The storyline is wrapped around three silly angels: Shirley, Goodness and Mercy. Known to be troublemakers, the archangel Gabriel has assigned each to deal with simple prayer requests. But, the angels have their eyes on a tougher case that Gabriel warns them is far too complex for their limited angelic skills. The angels actually don't appear as often as I expected them to, but I enjoyed their occasional antics.

Regardless of its transparent, interwoven plotlines, Touched by Angels was the right book at the right time, for me. Will I enjoy another book by this author? I have no way of knowing. In general, I read slowly and savor words. A book that isn't worth marking up with post-its is not, in general, usually going to end up a favorite. But, it was uplifting and fun, and I even shed a few tears. I thought my time was well spent. There was only one small annoyance: about 4 different characters *and* the narrator used the expression, "first off". A little editing might have been nice, for the sake of removing that bit of repetition. Otherwise, it was a quick and very fun read, so I'm giving the book a high rating.

This will be a real whopper of a weekend, again, due to school activities and probably will not post, again, till Monday. So, I'll leave you with three great moments from my day:

1. While standing outside, enjoying the brisk air and sunny skies that have moved in, I heard the neighborhood hawk three times and saw him (or her) twice. What a glorious sight a hawk in flight is! Now, if it would just come a little closer!! I had my camera with me, but the hawk was a bit too far away. I should add that I also spotted a woodpecker, watched a squirrel drop from the neighbor's oak tree and bustle around, listened to our mockingbird making a ruckus, and played with a neighbor's cat.

2. Watching as our cat Spooky suddenly became preoccupied with batting a ballpoint pen across the floor was a hoot.

3. The UPS man brought me a big box of goodies. I'd completely forgotten that one of the online book groups I'm in is doing a Halloween exchange, since my secret pal already received the box I mailed. I was particularly thrilled, of course, to see the box included a book: The Ghosts of Cape May. And, I loved the little bookmark magnets. And, the candle and bookplates and . . . wowee, it was like Christmas!

Currently reading: No Plot? No Problem by Chris Baty (the NaNoWriMo guy)

Hoping to get back to, soon: The Once and Future King by T.H. White

Bookfool trying to warm up after dressing inappropriately for a very cold football game.