My Brilliant Career by Miles Franklin 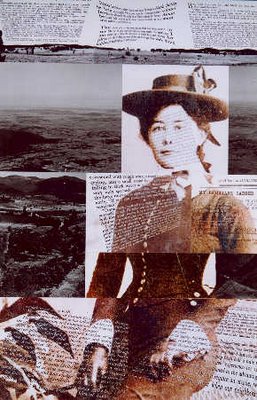 I pored with renewed zeal over the terse realism and pathos of Lawson, and enjoyed Paterson's redolence of the rollicking side of the wholesome life beneath these sunny skies, which he depicted with grand touches of power flashing here and there. I learnt them by heart, and in that gloriously blue receptacle, by and by, where many pleasant youthful dreams are stowed, I put the hope that one day I would clasp hands with them, and feel and know the unspeakable comfort and heart-rest of congenial companionship.

When Stella Maria Sarah Miles Franklin wrote the words above, in My Brilliant Career (her first novel), she was a mere 19 years old. Another 13 years would pass before publication, and upon publication certain members of her family raised a stink because they thought it was autobiographical and painted them in too negative a light. Not surprising, really, as a good portion of the book does seem to mirror that of Sybylla Melvyn. How close the book was to her real life I can't say because I've only read a few brief bios. But when you look at the photos of Miles (aka Stella) and read some of the passages, you can't help but think, "The novel sure seems to bear a strong resemblance to what I know of her real life."

The photo-montage above, by Jackie Ranken (found at an Australian website) shows a marginally attractive and petite young woman with thick, braided hair. Sybylla was tiny with thick hair that she braided; and, she considered herself ugly. Sybylla loved her grandmother's home and her family's first but hated her second home in Possum Gully:

God forbid that my experiences at Possum Gully should form the only food for my reminiscences of home. I had practically grown up there, but my heart refused absolutely to regard it as home. I hated it then, I hate it now, with its narrowing, stagnant monotony. It has and had not provided me with one solitary fond remembrance--only with dreary, wing-clipping, mind-starving recollections.

Goodness. Miles also moved during her youth, and apparently the move was similar. Sybylla was intelligent and yearned to associate with people who were her equals; she gobbled books when she had the opportunity but was often unable to get her hands on anything at all to read. Miles later met the Henry Lawson of the first quote and he helped her get the book published. Sybylla fought the normal conventions and refused to marry. Miles also chose not to marry and was a staunch feminist.

Whether or not the book is autobiographical, it portrays a time and place (Australia at the end of the 19th century) vividly. The story itself is both romantic and tragic. When the Melvyn family moves from a comfortable home where her father overseas several properties to a farm that ends up thrusting them into poverty because of a raging drought, Sybylla is unhappy, angered by the changes in their lives, especially the lack of higher-minded visitors with which they formerly socialized and the decline of her beautiful mother. Her father has gone from being a well-respected boss to drinking away what little money remains. Sybylla's ladylike but worn-out mother finds Sybylla's high-spirited and contrary ways exhausting and has nothing but negative words for her. Eventually, Sybylla is sent to her grandmother's home in order to lighten her mother's load.

This is the second major change in Sybylla's life, and it's a good one. She loves her grandmother's house and enjoys her tasks. There are plenty of books, lots of guests, lively conversation and ample food. The wealthy owner of the ranch nearest to her grandmother's, Five-Bob Downs, is a young man who is quiet, handsome and respectable. When Harry Beecham and Sybylla meet, they begin to spend time together and it appears that love and marriage are on the horizon.

But, Sybylla has already determined that she will never marry. Having seen the way women are worn down (as her mother was) by childbirth and wearying tasks so numerous that marriage is practically akin to slavery in her time and region, Sybylla has no interest in finding herself like her contemporaries. When she is sent to live in squallor at an isolated farm, where she must teach the children of a man her father owes money, then eventually returns home, Sybylla's feelings are reinforced. Harry Beecham, however, is madly in love and continues to pursue her till she sends a note that makes it clear she will never marry.

The ending was a little frustrating to my romantic soul, but at least in the movie it seemed to have less to do with Sybylla's poor self-image. I think that was what annoyed me the most about the book. Sybylla thinks herself a bad match for Harry because she is small and unattractive--or at least, that's one of the ways in which she justifies her rejection of him. Harry doesn't give a flip about her looks; he's just crazy about her. Throughout his own tragedies, he never forgets her; and, it is more than possible that he could not only aid Sybylla's downtrodden family but help her to fulfill her own dream of becoming a writer.

But, if Franklin were to have changed the ending of her story for the sake of pleasing romantic readers, it would have lost its point entirely. Sybylla, like Miles Franklin, had seen the way women were treated and was determined not to allow herself to become a blighted shadow merely because of attachment to a man and creation of family. Would Harry have chosen to abandon his vast holdings and travel with Sybylla if they'd married? Not likely. Would he have encouraged her desires or turned her into just another dreary, tired wife raising a brood of his offspring? How likely was it that a woman would not have children if she were to marry, in the late 19th century? Not very. There is a lot of sense in Sybylla's decision. If only she didn't blame her inadequacy on her appearance, the story would have been just about perfect.

And, therein lies my only real complaint as I think the story is written with maturity, well-plotted, and beautifully rendered. No wonder Franklin went on to have the brilliant career Sybylla longed for. Overall, an excellent read that makes me want to dig into more Australian literature.

Now reading: The Once and Future King by T. H. White