Babble Break! The Tale of the Snorkeling Television Host, Jessica's Etsy, and Whatever Else Comes to Mind

Oooh, look at all the little fishies! 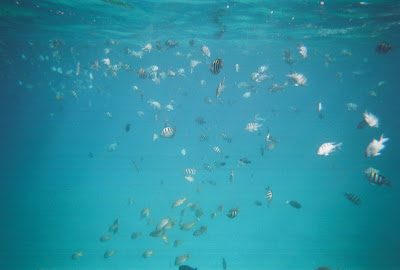 Yep, Hawaiian fishies. Pretty, aren't they? I took that with a disposable underwater camera because my own camera objects to moisture, vehemently.

ADD moment (aka, Change of Topic): It's been about 5 days since I finished The Bleeding Dusk and it is such a fantastic, entertaining thrill-ride of a book that I've been letting my thoughts roll around (bashing against the interior of my skull - great word picture, eh?) before writing up my review. I want to do it justice and this one requires some pondering. Hope to get to that and a review of Monkey Star, soon. For now, I'm kind of bored with myself and haven't been in the mood to write. So, today's post is going to be just chatter.

Yeah, okay, so back to the fishies. The following is a tale from Hawaii. Of course, you all know I could mine Hawaii for stories indefinitely, right? Anyway . . . . Huzzybuns and I went snorkeling whilst in Hawaii. We stayed at a place where boats passed visibly and regularly (and close to author Patricia Wood's docked boat . . . gah, still kicking myself for not getting in touch with her before I left-- you should definitely read her book, Lottery, if you haven't; had to throw that in). The Huz noticed the passing boats were rather packed with giddy tourists. In my photos of those boats, I've counted up to 25 people, so his powers of observation haven't yet faded. Because he thought it would be a better option to pay slightly more to go out on a boat with fewer passengers, we ended up on this pretty little yacht-like gem for "a three-hour cruise, a three-hour cruise" (ask me if that thought freaked us out, O Gilligan fans . . . answer: just a little): 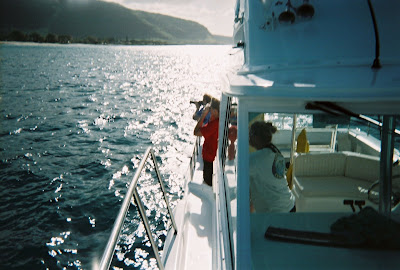 That's Bookfool, far to stern, pointing a 300mm lens at passing dolphins. In the cabin is one of the crew, whose name flitted out of my head before we even docked (she's a marine biologist), and next to me, in the red shirt, is a rather ebullient fellow named Jon.

Jon made an interesting comment that led me to believe he worked in movies or television, shortly after we pulled away from the dock; but, it wasn't until we were standing at the stern of the boat, discussing Honolulu traffic, that he dropped a second hint and I bit. Just at the moment I mentioned the large number of pedestrian deaths described in the newspaper, an ambulance drove past onshore with its lights blaring. Jon said, "And, cue," with a swoop of his arm and a pointing finger.

Bookfool could not let a hint like that pass, as she is nothing if not a curious chick. So, I asked the evil question, "What do you do?" I call this an evil question because, near as I can tell, I have no designation. Jon replied that he's the producer of a local Portland, Oregon show called PDXposed, and that he was in Hawaii to scout out locations for a future show (highlights are "music, arts, travel and entertainment"). The Portland airport is known as PDX, so the show's name is a, "little play on words, there." I didn't say so, but I thought Jon was host material; he's incredibly outgoing and talks to everyone on equal footing.

And, it turned out he was actually being slightly humble; Jon is the host of PDXposed, and a very good one. He's filmed 68 shows, most of which are archived at their website. And, he is definitely going back to Hawaii to film in May; they're even taking a tour group (see Jon's blog for details). I found that the clips I watched were family friendly . . . and then my speakers stopped working. And, my glasses broke. And, actually, the dryer is still acting hinky. I've been sucked into some kind of a metal fatigue vortex, I think, but anyway . . . I recommend the PDXposed site and I can tell you the host is a genuinely friendly, personable guy. Always nice to know, yes?

Here he is underwater and seemingly headless with the marine biologist and another passenger, Julie: 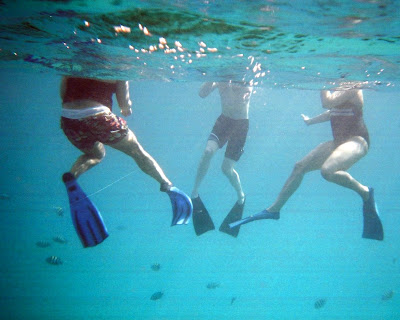 I need to find out what that guy eats; he's so nice and slim.

One of my favorite green-with-envy blogs is Jessica's: In Search of Dessert. She is freaking amazing with a camera, a talented writer, and lucky enough to be surrounded by terrific subject matter to photograph and write about as an expatriate living in beautiful Switzerland. Oh, man, unfair. Anyway, Jessica has just opened an Etsy (craft) site with her mother and it's so uber cool that you must check out Jessica's Etsy. She makes and sells "bookmark books", themed books with bookmarks made from found objects and pretty papers. Here's one of her hoopty designs: 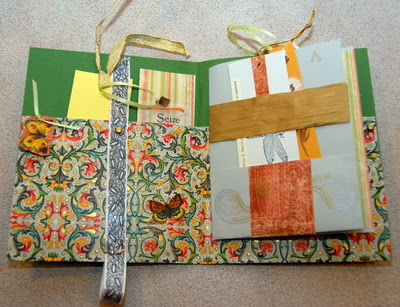 My eldest called to tell me that he's been allergy-tested. Not sure why he did so, when he could have simply called to acquire his records from the time we had testing done . . . but, okay. This is the humorous part: he's allergic to cats and he's decided he wants to get allergy shots . . . and two kittens. I said, "Umm, the thing with allergies is that you try to avoid your triggers. You don't get shots and then bring home the thing you're allergic to." But, you see, there's a shelter down the road and the kittens are so cute and he's living in an apartment --alone-- for the first time ever and he's sociable and lonely and, and, and . . . he's just so darned funny. I'm working on my, "Let go; he's a grown-up" skills. Wow, is that hard. On the plus side, if he acquires kittens, you know there will be kitty photos coming. I'll have to visit.

Third: It's all Carrie's fault!

Carrie of My Middle Name is Patience posted a link and I'm now completely addicted to this Traveler's IQ Challenge. In fact, the kiddo and I have actually competed to see who can get to the highest level. We're tied at Level 10 (out of 12). Most of the time, I at least hit the correct continent, which is a good starting point. But, wowee. This American needs a new atlas and a block of time. I've guessed as far as 15,000 kilometers away from the correct geographical location of some cities. I probably shouldn't admit that, but I've also hit some cities within 25 kilometers, so I figure it all evens out.

Okay, enough prattle for one day. Next up will be book reviews of The Bleeding Dusk and Monkey Star. I knew you'd be thrilled. You can quit jumping up and down, now.

Bookfool, off to soak her head
Posted by Bookfool at 10:39 PM