Happy Wednesday! a tiny bit late. Seems like it's been a while since I did any wahooing, although I recall feeling like the post-Christmas shopping in Oklahoma City was something to wahoo about, not to mention the city's extraordinarily civilized traffic. Since most of my time in Oklahoma was spent in a room with ugly pink walls, a crap TV and one very sick mama, wahooing should be very easy this week.

1. Wahoo! for this beautiful autographed copy of Monkey Star, sent to me by author Brenda Scott Royce: 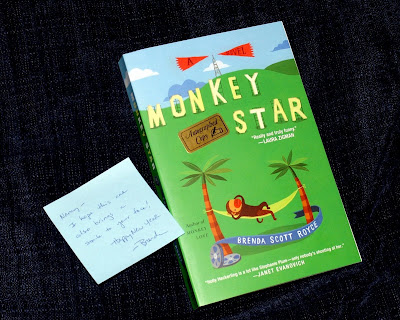 It's actually been kind of difficult saving this photo for Wednesday because it was just such a ridiculously exciting book to receive. Monkey Star has been on my wish list since before it was published, from the moment I closed my copy of Monkey Love, Brenda's first book and one of the 2007 reads that totally stuck with me because it was unique, quirky, fun and smile-inducing. She drew the cutest little monkey face inside. Thank you, Brenda!!!

2. This is so silly, but . . . wahoo! for sparkly little happies. This ornament helped make me feel like each room that I moved to (and I bopped around a bit in OK) was a little more personal: 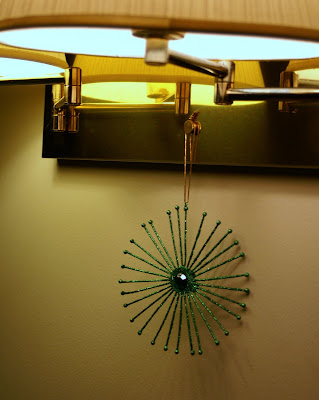 I bought this glittery bit of fun at a post-Christmas sale and hung it from either a lamp or or some other knobby thing in each of my hotel rooms (and a shelf in my mother's house). It is now hanging in our living/dining room (in which we do not dine, but merely live - so do hundreds of books, just FYI).

3. Hawaiian wahoo! This little island is apparently called The Chinaman's Cap. Or maybe it's Chinaman's Cap. Or hat. Okay, I don't remember, but when I took the photo I just thought it was kinda pretty and I need to travel back mentally, now and then, so here you go: 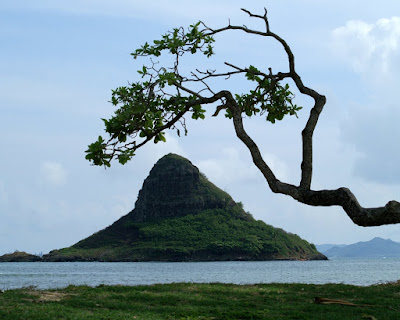 4. And, another little bit of coolness . . . not really a wahoo, so much as something interesting. While I stood on the grass, looking out toward Chinaman's Cap, Huzzybuns walked around in the water and turned around to photograph me (yurgh). Photos of moi are, in general, not worth looking at. But, I thought that this little cropped bit of photo was fun - the Huz reflected in my sunglasses: 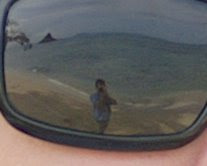 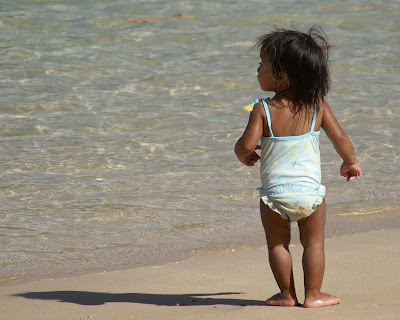 Just finished: The Power of Adversity by Al Weatherhead with Fred Feldman. Review forthcoming. It's small, but at least I finally finished something.

Next up: Monkey Star by Brenda Scott Royce, of course.

How's the Book Diet going? Stunningly well! Half of January is over and I've only bought one book!!! I'm so pleased and proud.

Coming up soon: The Tale of the Snorkeling Television Host (because I need to reflect on Hawaii, for a while . . . and he was a fun guy to hang out with).