Of Books and Hawks and Traveling Beasts

First the books, since this is allegedly a blog primarily devoted to my reading. I finished two, last week, and both were simply perfect for the moment. 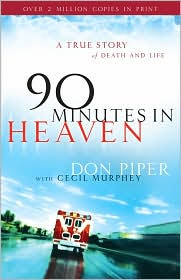 90 Minutes in Heaven by Don Piper has been on my wish list at Paperback Swap for quite some time and my mother just happened to receive a copy while I was visiting in November. So, I borrowed Mom's copy whilst taking a weekend break from the hospital and gobbled it right up.

This is a Christian book, written by a minister who was involved in a horrific truck/car accident in which his car was crumpled and his body severely mangled. EMTs on the scene found no pulse and covered Piper with a tarp, then moved on to help other victims. Still without a pulse when another minister arrived on the scene and began to pray for his recovery, signs of life returned to Piper only after prayer. It was much, much later that the author quietly told a friend about his time in heaven and it took many years before he was able to write the story, with help from a published author.

The result surprised me. I thought the book would be a little hokey, with the usual "light at the end of the tunnel" description. Instead, Piper described being greeted by loved ones and the colors and sounds of heaven, as well as his disinterest in earth or returning to life. I found it oddly compelling and believable. A good portion of the book describes his excruciating recovery from injuries (so severe that several inches of bone from his leg were actually ejected from the car and never found). Definitely recommended, especially if you're in need of reassurance about the so-called "afterlife". 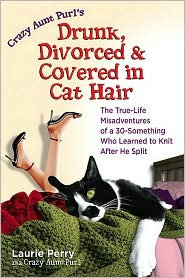 Crazy Aunt Purl's Drunk, Divorced & Covered in Cat Hair by Laurie Perry was my January splurge. I'm on a strict book budget, this year -- only allowing myself to purchase one book per month -- and I took plenty of books with me to Oklahoma (honestly, can you imagine me *not* taking at least a dozen?). But, I was in desperate need of extra-light reading material because I simply couldn't concentrate for any length of time, so I grabbed this one off the racks on impulse. This particular book has been on my wish list since I read Laurie Perry's tribute to her cat, Roy and laughed and sobbed my way through it. If she ever writes a book specifically about her cats. I'll be the first in line.

Crazy Aunt Purl, etc. is, however, the author's account of the time after her husband abruptly left her. Because her divorce was traumatic, the book is a little sadder at the outset than I expected. But Perry has a terrific sense of humor and tells a pretty good tale. She describes her depression, the adjustment to her life as a single person and how knitting and new friendships brought joy back to her life. There are some knitting patterns in the back of the book and I hope to use those, one day. I'm going to pick up those knitting needles and learn to cast on soon, honest. In the meantime, I'm glad I read the book and definitely recommend it, especially if you're looking for a quick, light read. 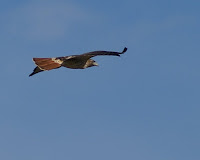 On to hawks, or raptors in general. I've taken to counting hawks on the 9-hour journey to Tulsa (and, sometimes, the extra hour over to Oklahoma City or up to Ponca). Since I still don't know how to identify the different species of hawks all that well (some, like red-tails, are pretty obvious in flight - others make me scowl), I'm calling all of the raptors I spot "hawks" - including kites, northern harriers and the occasional kestrel. I can distinguish such raptors from a turkey vulture or crow, both of which are eliminated from my count. It's the counting part that's hard. I find myself counting like this: "42 . . . 43 . . . 44 . . . uh, 42." So, this time I kept a scratch-pad and pen on the passenger seat of the car and jotted down bars for each hawk spotted. I also counted patrol cars. Boy, was that scratch-pad messy. However, it was readable and the final count was:

Go raptors!!! Here's one of the patrol cars, with its pretty flashing lights: 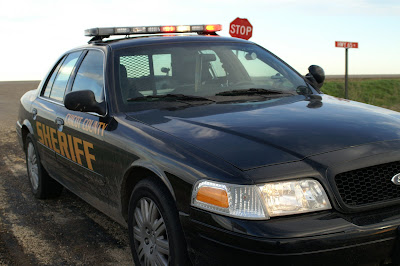 No, I did not get another speeding ticket. I would never.

My mother was in the Intensive Thoracic Care Unit of Baptist Hospital when we arrived in Oklahoma City on Christmas Day. Because it was a holiday weekend and the situation was critical, the guys went with me and we loaded up the cat and dragged her along. Here's Miss Spooky, Intrepid Feline of the Daring Road Trip, with maps of each of the states she's driven through (or, in the case of Mississippi, out of) on her back: 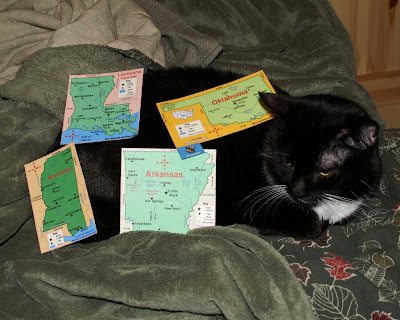 She was terrified but remarkably quiet. I don't think we could have asked for an easier road trip with a cat. We dropped off Spooky and kiddo at the home of my delightful in-laws. Both cat and teenager apparently made themselves very much at home and were spoiled mercilessly. At least, the cat was. She got salmon. And, since a trip to Oklahoma wouldn't be the same without a visit to Eskimo Joe's, Spooky got her first Eskimo Joe's merchandise. You can see she was elated: 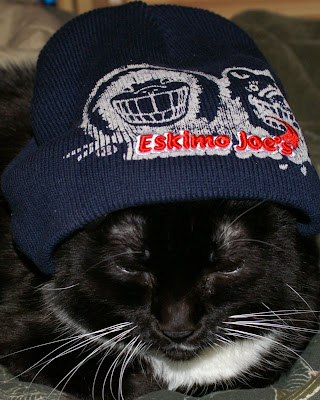 This is, of course, the real reason you read my blog.

Coming up next: Book excitement discovered upon my return. But, for now, I have to go kick my dryer. It's currently not working and that ticks me off. I have mucho laundry to do.

Bookfool, very glad to be home but wishing she lived in a state where things actually dry out if you hang them outdoors
Posted by Bookfool at 8:04 AM

Email ThisBlogThis!Share to TwitterShare to FacebookShare to Pinterest
Labels: books, cat photos, recommended, you name it