Getting Stoned with Savages by J. Maarten Troost 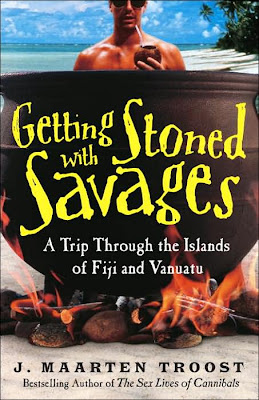 What led you to pick up this book? I enjoyed Troost's first book, The Sex Lives of Cannibals.

Summarize the plot but don't give away the ending. Not a plot, since it's nonfiction, but the book tells about how the author grew tired of actually having to work for a living and urged his wife to return to the South Pacific. Getting Stoned with Savages tells about their time living in Vanuatu and Fiji and their choice to begin a family while living in their new island home(s).

What did you like most about the book? I like the author's light-hearted style, although this book contained more dreary history and political exposition than the first and that made it drag a bit.

What did you think of the characters? I thought they were fascinating. I don't necessarily understand the author or his wife and was rather baffled by his choice to leave a job where he was apparently making piles (pretty much because he didn't want to work - addendum: I forgot he was, in fact, fired - this shows you how messed-up I am) or their decision to start a family in a Third-World Nation. But, then Brad Pitt and Angelina Jolie had a baby in Africa, of all places, so there's a lot I don't get. I always find that he makes his neighbors and friends sound like people I'd like to at least observe . . . invisibly.

Share a favorite scene from the book: I liked the description of their visit to an active volcano. What the guide said and how they ended up leaving were both pretty funny.

In general: Not as good as his first, but I still like his style and got enough enjoyment out of the book that I'll end up buying his third - probably in 2009 or 2010, because of the book diet thing, assuming things go well. It took three attempts before I managed to get a copy of this book; the first two were both lost in the mail.

3.5/5 - Good enough not to give up on the author, so I'll call it "above average" but the next book is the acid test, so to speak. He'd better be a little more entertaining or it's back to the bank for him. Hahaha. I say that, but he's probably already back to making piles of money. Some people get all the breaks.

Now attempting to read, but I can't seem to focus for long: Crazy Aunt Purl's Drunk, Divorced and Covered in Cat Hair. That's my January purchase because I needed something way light. Don't blame the author if I can't get into it. I just can't concentrate, these days. Another addendum: You should probably take that into account when looking at my ratings. "Bookfool is whacked up," you should say to yourself, "and I will therefore give authors a chance, even if she says a book put her to sleep. She's kind of sleepy all the time. I get that."

Sorry so short. I'm also attending online Traffic School in order to keep that stupid speeding ticket off my record. It's actually kind of fun, but I have to hurry up and finish it before heading back to Oklahoma City. Update: I passed my final with a score of 100%!

And, another update: Andi's review of Getting Stoned, etc. is soooo much better than mine. Please go read it and then feel free to sit around in awe of her gigantic brain and awesome writing skill. I know I am. Thanks to Les for reminding me that Andi read the book last year.

Have a peachy day!
Posted by Bookfool at 6:56 PM