The Power of Adversity by Al Weatherhead with Fred Feldman 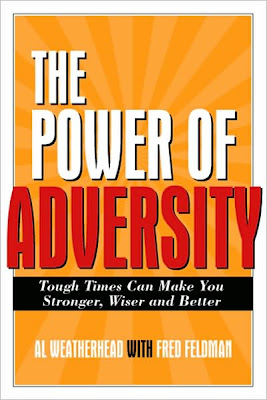 What led you to pick up this book? I requested this advanced reader from Lori at Jane Wesman Public Relations because it sounded like the kind of book I need to read.

Summarize the plot but don't give away the ending. The Power of Adversity is a self-help book about dealing with life's challenges, subtitled "Tough Times Can Make You Stronger, Wiser, and Better". The author's goal is to share what he's learned from his own battles in both his business and personal life, including alcoholism, rheumatoid arthritis, heart disease, the loss of his father's company and the venture into his own manufacturing business.

What did you like most about the book? I like the author's attitude. Positive thinking books are something I read periodically, particularly when I feel like things are looking a little bleak. The author has some sensible advice about dealing with adversity, in part, by treating other people more kindly. For example, he suggests that driving nicely(letting people cut in), giving your time to charity, etc., will help make you feel better as you endure challenges.

What did you think of the characters? The book was partly a personal narrative about the challenges the author and his family have faced. I thought he had a slightly shallow view of his own experience and how it might apply to readers' difficulties. He grew up privileged but with a cold, pragmatic father. When Al Weatherhead was ready to join his father's company, his father wanted to send him to the production line(I assume to learn the business from the bottom up). Al thought his father was punishing him and left home, moving from one dead-end job to another. Having just viewed the movie The Ultimate Gift, and not having experienced swanky schools or privilege, I saw the young Al as spoiled and ungrateful for opportunity. He's now in his 80's and eventually built a thriving business of his own, but he went through a lot of heartache and still doesn't see his father's decision to place him in a lower position rather than straight into management as one that could have been beneficial to him. That bugged me. Otherwise, I thought he sounded like a pretty interesting and tenacious guy.

Share a favorite scene from the book: I'm going to stick with generalities. I particularly like what he has to say about kindness to others and seeing problem solving as one of life's joys. He talks about how we all face adversity and that it's simply a part of life and we should use adversity to make ourselves better people.

In general: The author's experiences are rather unique and his suggestions only partially apply to my current challenges, but I thought he offered some decent advice. The writing was a bit heavy on cliches and I think the author has a slightly unrealistic viewpoint to offer to the general populace. And, yet, I'm glad I read it. The book is a quick read, good for when it's difficult to concentrate because one is facing adversity and having difficulty focusing. I appreciated the brevity.

3/5 - Some good advice, couched in cliches but worth the time to read if you need a little positive injection while going through rough times.

First DNF of 2008: A Tale of Two Cities by Charles Dickens. I decided The French Revolution is just not what I need to read about, right now, so I've substituted The Pickwick Papers as my Dickens entry in the "My Year of Reading Dangerously" challenge. Good decision. The Pickwick Papers is pleasantly goofy.

2/3 Finished with: The Bleeding Dusk by Colleen Gleason and hoping to finish that one, today. I love Colleen's writing. So far, this third novel is every bit as gripping as the first two.

The landlord of the American said the party had been gone nearly an hour, but that he could give me my choice of several horses that could easily overtake them. I said, never mind--I preferred a safe horse to a fast one--I would like to have an excessively gentle horse--a horse with no spirit whatever--a lame one, if he had such a thing.

Hope everyone has a terrific weekend!

Bookfool, off to read
Posted by Bookfool at 11:13 AM