I still haven't felt like blogging or writing reviews--not sure what's up with that, but I sat down a couple of times and just stared at the screen, this weekend. However (this part is bizarre and unprecedented . . . at least in recent years), I did go on a cleaning frenzy. The "office", formerly eldest's bedroom, is now quite tidy. And thanks to some pretty amazing weather, today (60's, sunny, a hint of breeze), my front yard is looking neater. No need for help from the Mormons; just stick that strapping 16-year-old behind the other rake and . . . well, it still takes more time than what's required for the job to be completed by 4 Mormons because the yard is big and there are just two of us, but we've got improvement and we're happy. My handsome youngest, a few months ago, so you can visualize the kiddo with a rake: 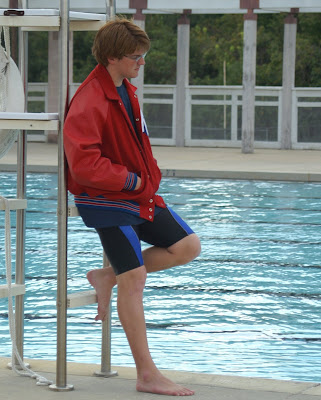 There really ought to be a book in this, somewhere . . .

Eldest Kid Antics, or something like that. Eldest called home complaining that his truck was making a "loud humming noise; I mean, really loud." He wanted his father's advice, but the Huz was en route home from places far. I asked Eldest to describe the noise, when he was hearing it, how it started, blah, blah, blah. And, it sounded like a tire issue to me -- either that or just the pitch of the pavement. Was there any construction going on? Could it be just the pitch of a new surface? "No," he said, "it can't be the road. It's really, really loud." I won't go into the whole weekend saga, but let's just say he spoke to his father and they bounced around ideas and he somehow managed to convince himself that it was a major engine problem . . . then he looked at his tires. And, they looked a bit . . . flabby. One air-pressure gauge and tire-filling run later and --miracle!-- the noise is gone. I'm so smart it kills me. Kidding, kidding.

Meme time! I begged Kookie to tag me for this one. Eva is the creator of this meme.

Which book do you irrationally cringe away from reading, despite seeing only positive reviews?
Easy . . . The Kite Runner. It sounds so utterly depressing that I just haven't talked myself into reading it, yet, although a friend sent me her copy and eventually I'll give it a try. I'm actually always hesitant to read the latest "in" book and tend to wait till hot-selling books are no longer getting a great deal of buzz, before I read them, but this one really makes me cringe.

If you could bring three characters to life for a social event (afternoon tea, a night of clubbing, perhaps a world cruise), who would they be and what would the event be?
Well, I'll tell ya . . . I don't usually latch onto character names and hold them in my memory, so this is a rough one. But, I'll say Tom Sawyer and Elizabeth Bennet go on a Mediterranean cruise with Loki, the prankster god of Norse mythology. Imagine the fun.

(Borrowing shamelessly from the Thursday Next series by Jasper Fforde): You are told you can't die until you read the most boring novel on the planet. While this immortality is great for a while, eventually you realize it's past time to die. Which book would you expect to get you a nice grave?
Oh, wow, another hard one. I tend to just set aside books that don't work for me and give them another try later. If a second or third attempt doesn't work, they're swapped or given away and I erase them from my mind. However, I've attempted Gone with the Wind three times and never gotten past page 50. I can't say it would bore me to death, but the timing certainly wasn't right.

Come on, we've all been there. Which book have you pretended, or at least hinted, that you've read when in fact you've been nowhere near it?
Honestly? I can't say I've ever done that. But, there may have been times that the opposite was true -- I forget I've read a book until someone begins to talk about it and I realize, "Oh, yeah, I read that eons ago." I just realized, recently, that I read A Christmas Carol a long time ago. And, for years I've thought my life had a big Dickens-shaped hole that I desperately needed to fill.

As an addition to the last question, has there been a book that you really thought you had read, only to realize when you read a review about it/go to "reread" it, that you haven't? Which book?
If I have, it's slipped my mind.

You're interviewing for the post of Official Book Advisor to some VIP (who's not a big reader). What's the first book you recommend and why? (If you feel like you'd have to know the person, go ahead and personalize the VIP).
That's hard because I really do think you have to know a person to get a feel for his or her taste, but I'll cheat a little and say The Count of Monte Cristo or The Three Musketeers. I've always thought either would be a great to use as a learning tool in school because they're intelligently written and rife with action. I was shocked to find that Alexandre Dumas was strictly a "money writer" and churned those chunksters out like muffins. Anyway, I have to go with Dumas because too many people have already used To Kill a Mockingbird and I don't want to be dull.

A good fairy comes and grants you one wish: You will have perfect reading comprehension in the foreign language of your choice. Which language to you go with?
Spanish. Ever since a friend-- born in Spain and enthusiastically bi-lingual-- sat down beside me in the high school hallway and read poetry to me in Spanish (then explained how much the poem lost in the translation), I've longed to learn Spanish. I'd gobble up everything Pablo Neruda has written.

A mischievous fairy says you must choose one book that you will reread once a year for the rest of your life (you can read other books, as well). Which book would you pick?
Desiree by Annemarie Selinko. I've read it 4 times and would happily reread it yearly. You can read bits of it, here. I'd reread The Count of Monte Cristo annually, also. Oops, more cheating.

I know that the book blogging community, and its various challenges, have pushed my reading borders. What's one bookish thing you "discovered" from book blogging (maybe a new genre, or author, or new appreciation for cover art--anything)?
Well, let me think. I've discovered I really dislike challenges because I'm far too spontaneous. I want to read what I want to read when I choose, as opposed to feeling obligated to stick to a list. But, I've also discovered that I love spooky books. Two years ago, I would have walked over fire to avoid anything scary, but Carl's RIP Challenge changed that. It's the only challenge I actually eagerly look forward to.

That good fairy is back for one final visit. Now, she's granting you your dream library! Describe it. Is everything leather-bound? Is it full of first edition hardcovers? Pristine trade paperbacks? Perhaps a few favorite authors have inscribed their works? Go ahead--let your imagination run free.
Okay, I really like the library in Arundel Castle (West Sussex, England), but I can't find a photo. Darn. And, truly, it's too big for one little scrap of a family, so I'll say mahogany book cases with the classic sliding ladder, a few hardcover copies of favorite books but mostly crisp trade paperbacks. Plushy leather chairs and sofa, a marble fireplace, tables and a large desk that match the book cases. Oh, and I'd prefer that all the book cases contain glass doors to discourage dust. Lamps, lamps, lamps everywhere. I have quite a few autographed books, but I'd love to own more. There should be lots of windows to let in loads of light during the daytime hours and French doors to a veranda overlooking a broad expanse of trees, flowers and a bubbling river. You can really get carried away with this one. Back to my normal foolishness . . .

I got a note from PDXposed host Jon's production manager, Julie (wave, wave) in response to my comment about finding out what he eats in order to stay so slim. She said chicken. Lots of chicken. And, steak on Sundays. Here's a Hawaiian rooster's response to that. 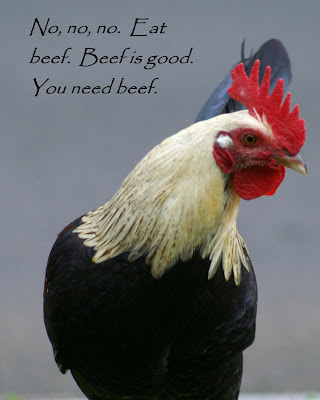 He's obviously showing off his good side.

One more story! My Bible study group just began a new session, yesterday, and I still owed the church money for the last Bible study book (having zipped out of town, repeatedly, I managed to acquire the book without paying for it). Kiddo brought my checkbook in the middle of the introductory video and I didn't want to disturb anyone, so I held my check until it was time to pass prayer requests down the row. One of the ladies looked at my check, within the pile of prayer requests and said, "Wow, those are some expensive prayers." Hahaha. Well, I thought it was funny.

Now, everyone pray that I can talk myself into writing a book review, tomorrow. Or, you can cross your fingers. Whatever works.

Bookfool, still dripping with joy from her day in the sunshine
Posted by Bookfool at 7:24 PM