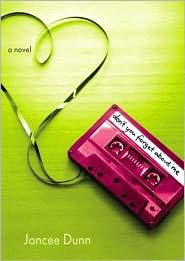 On weekends, the bustling quotidian activities that move the day forward would slow and catch. I was steeped in lonesomeness. My pride wouldn't allow me to tell Ginny that I was foolishly, absurdly glad to go to sleep knowing that there were other people breathing quietly in a room down the hall.

What led you to pick up this book? I was in the mood for something light (but not painfully fluffy).

Summarize the plot but don't give away the ending. Lillian Curtis has a great job as the producer of a talk show and a quiet stable marriage -- or so she thinks. Then, her husband drops a bombshell: he is bored and unhappy; the marriage is over. Shocked and suddenly lonely, her boss advises her to take time off and 38-year-old Lily moves into her parents' house when the lease on her apartment expires. Her high school reunion is coming up, so she immerses herself in memories and imagines herself hooking up with the popular boyfriend who disappeared from her life shortly after college began. But, as she closes herself up within her memories, Lily is also shutting out the truth of her past.

Will her high school reunion bring back happy days or simply force her to face up to adult life? Is it possible to heal old wounds and find a newer, better way to live life? And, what on earth happened to Christian, the handsome boyfriend who has been spotted in Paris and London?

What did you like most about the book? I loved the fact that the book was a fairly quick, light read without being completely meaningless. Sometimes the dialogue was a little lame and some of the reflections on the 80s were uncomfortable (it was just not my favorite decade), but I never felt bogged down. There was an underlying theme of facing the fact that life moves on, that growth and change are inevitable.

What did you think of the characters? I liked Lily a lot, primarily because she was a simple person who preferred to spend her time off in her pajamas or watching old movies with a friend (as opposed to partying). Her simple habits didn't make her uninteresting or unlikable. They just made her unique.

Why did every other person feel compelled to mention how busy and overbooked they were? And what could I possibly write? I keep idle with a full roster of daytime television, Internet surfing, and lingering visits to big-box stores to buy nothing in particular. Suddenly I turn around and it's dinnertime!

Share a favorite scene from the book: The Los Angeles Times review describes my favorite scene as just one "occasionally gimmicky contrivance". Oh, well, hmm. Actually, I thought it was rather delightful and funny when Lily called a catalog phone number to order a pair of green sweatpants (because she thought her parents wouldn't appreciate her habit of relaxing in her pajamas) and the sales representative ended up giving her useful advice. I did think it was odd when Lily called the same catalog in order to speak to Trish, once again, and managed to get in touch with the her immediately, without having to ask for her by name. But, the first of those advice scenes was such fun that I read it aloud to my husband. He liked it, too.

Recommended for those who are looking for a light, nostalgic (80s nostalgia, that is) read that is not totally fluffy, but is in some ways highly improbable. There were a few points at which I had a little difficulty with suspension of disbelief, but when I pick up a lighter book I'm usually willing to work at shutting off skepticism because I want a little vapid fun. I really enjoyed this read.

In general, I'd call the book "average to slightly above average compared to similar books". Definitely not a book to pick up when you're in the mood for deep thinking and beautiful word pictures, but great for a brain break.

I would have loved it if the author had elaborated on some of the characters' weird traits. For example, Lily's boss Vi mentioned Lily's special ability to sniff out minor scents and note that someone had, for example, bathed in lavender soap, eaten in a Chinese restaurant and then arranged some carnations (or, whatever). It would have been really fun if Dunn had expanded on that and had Lily noting that a friend had obviously changed a diaper before jumping on a plane and throwing on perfume at the last minute or sniffed out the lemon pledge and fabric softener scent clinging to her mother as she passed.

This is another good example of another character's oddities that I would have loved to hear more about:

Drew had a boundless trove of life rules, simple stratagems that he deemed necessary for happiness and that he was not shy in announcing. No "inspirational coach" movies, except on airplane flights longer than four hours. Never wait in line for breakfast; no exceptions. Baseball caps are for males under six years of age or over sixty-five. Do not date a woman who uses journal or dialogue as a verb. And no sandwiches at dinner ("There's a pathos to sandwiches at dinner. Lunch only").

Read another review, here (let me know if you've read this book and I'll add a link to your review):
Los Angeles Times

Squeeee! and Wahooooo! High school swim season has started and the kids were finally able to get to the pool, after a week of storms. I'm so glad to be back to watching the kiddo do this: 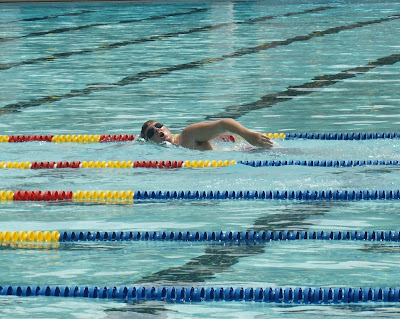 Also, wahoo! for my lovely book-gobbling friends, who got me through yet another really awful day of the sister's lunacy. You're my real sisters.

Get Smart: How e-mail can make or break your career And Your Organization by Mary Lynn Pulley and Jane Hilberry (it's a very quick read -- review forthcoming).