Care threw me over the edge; I've had such fun reading this meme at other blogs and just loved her answers, so I decided to join in.

The things I have done are in BOLD.

1. Started my own blog (rather obvious, eh?)
2. Slept under the stars (camping -- a tent counts, I assume)
3. Played in a band (not the good kind, the elementary-jr.high-high school variety)
4. Visited Hawaii (Oahu twice, the Big Island and Maui)
5. Watched a meteor shower (numerous times; they're amazing)
6. Given more than I can afford to charity
7. Been to Disneyland/world (with a nursing baby in that heat -- miserable!)
8. Climbed a mountain (Flat-top mountain and some little bitty ones in Colo.)
9. Held a praying mantis
10. Sung a solo
11. Bungee jumped
12. Visited Paris
13. Watched lightening at sea
14. Taught myself an art from scratch
15. Adopted a child
16. Had food poisoning (very non-fun; bad guacamole at the Mexican restaurant)
17. Walked to the top of the Statue of Liberty
18. Grown my own vegetables (they were dinky and wrinkled)
19. Seen the Mona Lisa in France (walked past the Louvre; didn't go in)
20. Slept on an overnight train (to Chicago, when young)
21. Had a pillow fight
22. Hitchhiked
23. Taken a sick day when you’re not ill
24. Built a snow fort
25. Held a lamb
26. Gone skinny dipping
27. Run a Marathon (if a 10K counts)
28. Ridden in a gondola in Venice
29. Seen a total eclipse (I can see why the ancients were freaked)
30. Watched a sunrise or sunset (Hawaii and Oklahoma win "best sunset locations", IMHO . . . so far)
31. Hit a home run
32. Been on a cruise
33. Seen Niagara Falls in person
34. Visited the birthplace of my ancestors (Where's that? My ancestors were from everywhere! I'm a mutt!)
35. Seen an Amish community
36. Taught myself a new language
37. Have enough money to be truly satisfied
38. Seen the Leaning Tower of Pisa in person
39. Gone rock climbing
40. Seen Michelangelo’s David
41. Sung karaoke (at home, not in public)
42. Seen Old Faithful geyser erupt
43. Bought a stranger a meal at a restaurant
44. Visited Africa
45. Walked on a beach by moonlight
46. Been transported in an ambulance
47. Had my portrait painted (I have been sketched, though, by the daughter of one of my father's friends . . . in colored pencils . . . and she was quite talented)
48. Gone deep sea fishing (on the list of things I want to do, definitely)
49. Seen the Sistine Chapel in person
50. Been to the top of the Eiffel Tower in Paris (walked past it . . . sheesh)
51. Gone scuba diving or snorkeling
52. Kissed in the rain
53. Played in the mud (made little vases out of mud -- too fun)
54. Gone to a drive-in theater
55. Been in a movie (O, Brother, Where Art Thou?)
56. Visited the Great Wall of China
57. Started a business
58. Taken a martial arts class
59. Visited Russia
60. Served at a soup kitchen
61. Sold Girl Scout Cookies
62. Gone whale watching (Maine and Alaska -- Alaska was particularly awesome)
63. Got flowers for no reason (but I got a cactus, cough, hack, weird)
64. Donated blood, platelets or plasma
65. Gone sky diving
66. Visited a Nazi Concentration Camp
67. Bounced a check
68. Flown in a helicopter
69. Saved a favorite childhood toy (plus, I have one of my dad's childhood toys, which is a mess but I love it)
70. Visited the Lincoln Memorial
71. Eaten Caviar
72. Pieced a quilt
73. Stood in Times Square
74. Toured the Everglades
75. Been fired from a job
76. Seen the Changing of the Guards in London
77. Broken a bone (um, a toe -- it still looks weird, like it's pregnant or hunchback)
78. Been on a speeding motorcycle
79. Seen the Grand Canyon in person (very, very young -- the north view)
80. Published a book (okay, sort of -- a short story in a book)
81. Visited the Vatican
82. Bought a brand new car
83. Walked in Jerusalem
84. Had my picture in the newspaper
85. Read the entire Bible (I'm going for it, again, next year)
86. Visited the White House (exterior only -- didn't go inside)
87. Killed and prepared an animal for eating
88. Had chickenpox
89. Saved someone’s life (hasn't every mother saved her kid from getting run over, shocked, or drowned, at some point?)
90. Sat on a jury
91. Met someone famous (director Alan Parker, now Sir Alan Parker, Willem Dafoe, Kevin Dunn -- all because Mississippi Burning was filmed here and the publicist mistook me for the set photographer, then introduced me to director and stars when I corrected him -- talked to Linda Howard on an elevator, took a workshop led by Nevada Barr . . . I saw the Queen of England from a distance and shared a table at Benihana's with Matt Dillon)
92. Joined a book club (online only)
93. Lost a loved one
94. Had a baby
95. Seen the Alamo in person
96. Swam in the Great Salt Lake
97. Been involved in a law suit
98. Owned a cell phone
99. Been stung by a bee
100. Rode an elephant

Wow, more than I expected! I need to spend more time bopping around Europe, apparently.

What the heck is that???? [below] A space on a bookshelf in Bookfool's house??? 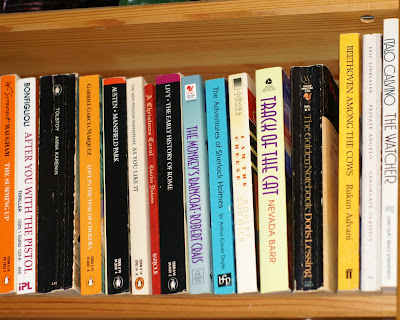