My Sister Dilly by Maureen Lang 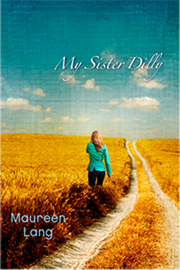 What led you to pick up this book? Brittanie sent me her ARC because she thought I'd like it and , oh, wow . . . she knows me well. I read the cover blurb and plopped right down immediately.

Describe the book without giving anything away. When Catherine "Dilly" Carlson committed a crime that landed her behind bars for six years, her sister Hannah felt guilty. If only she'd have stayed Illinois instead of moving to California, the crime never would have occurred. Or, so Hannah believes.

To atone for her absence, Hannah has spent years saving up the money to move home. Her objective is to be there for Dilly, but in order to do so she has had no choice but to leave behind a terrific job and the only man she has ever loved. Hannah expects her sister to be thrilled with the plan, but things have changed in a way that Hannah never could have anticipated.

What did you like most about the book? My Sister Dilly is a wonderful story about faith, love, redemption, family, respecting people with disabilities, dealing with the past . . . lots of issues but they all fit together and the story is very nicely focused. I had a terrible time putting it down.

What did you think of the characters? I cared about them and wanted to know what would happen. I did become a little weary of Hannah's justification for not returning to California when it became obvious that she had a very good reason to change course, but eventually Hannah makes sense of everything.

Was there anything you didn't like about the book? I think it could have lost about 50 pages. Sometimes, there was just a bit too much everyday detail -- not a big enough problem to put me off, though. Also, I had a little trouble with the POV switches. The book is primarily Hannah's story, but it occasionally switches to Dilly's perspective. However, toward the end I thought it became clear why the author made the choice to occasionally switch to Dilly's point of view.

Recommended? Highly recommended. I think it's a beautiful story in too many ways to list.

Anything else worth mentioning? It's a Christian book and you can expect talk about God, but the main character has spent years rebelling against her Christian upbringing because of her Bible-thumping, rule-enforcing, and somewhat cold parents. Hannah spends most of the book feeling confused and ambivalent about God. On the flip side, Dilly believes she would never have survived prison if she hadn't rediscovered Jesus.

Cover thoughts: I like the cover for its looks; I think it's lovely. But, it doesn't entirely fit. Hannah and Dilly were raised on a farm -- a hog farm, though. To my knowledge wheat fields aren't all that relevant to the story, even though it takes place in the Midwest. On a side note, I love wheat because it reminds me of home. Wheat and a big, wide open sky . . . probably one of my favorite sights. Also, I have to mention that when the author described the hog farm, her description was so vivid I still imagined I was smelling manure for an hour after I put down the book.

What do you think? I always talk about the religious element of books (including, recently, a book that was very pro-Buddhist) and whether I consider a book preachy or heavily religious because I think that's something people tend to want to know about. How about you? Does Christianity in a novel effect whether or not you'll consider reading it? If so, do you feel that way about other religions and how they're portrayed? Just curious. My library has an interesting identification system. The Christian novels have a little picture of Jesus on the spine. Sci-fi novels have a little space-age symbol, Westerns sport a pair of boots with spurs, mysteries and romance . . . can't remember, but they have their own little spine emblems, too. I love that! It's nice to have that extra little bit of information when you're browsing.

Cattery Row by Clea Simon - won in a drawing at Thoughts of Joy. Thank you, Joy!

Cruel Intent by J. A. Vance - Sent by Simon & Schuster - I'm not sure about this one, as I've never read the author. Are her books nightmare-inducing? Warn me, if they are, somebody.

A parcel from Carrie K., who is one of my bestest best blog friends because she she's witty and fun and has a great cat whose portrait I'm going to take, someday. I'll take picsof the bounty and show you, tomorrow, if we're not out playing in the snow that is allegedly due to arrive any moment now (none of us are holding our breath). Actually, we're getting tons of Mississippi Snow . . . the melted kind.

Also, I have to show you what my wonderful, amazing Secret Santa Blog Christmas Exchange Pal gave me! Bellezza, another blogger I adore and count as one of my bosom blogging buddies was my Secret Santa. It's all so very, very perfect. Oh, and I was going to save everything for Christmas, but I couldn't wait and ripped into it. Thank you, Bellezza! More on that, later.

I've been out doing my part helping the economy, today, so I haven't read a word. I'd better hush up and do that. Sorry about the lack of wahoos. Busy, busy, but I'll make my gifties my belated wahoo. Have a wahooey day!

Email ThisBlogThis!Share to TwitterShare to FacebookShare to Pinterest
Labels: book reviews, recommended, What do you think?