Waiting for Daybreak by Kathryn Cushman 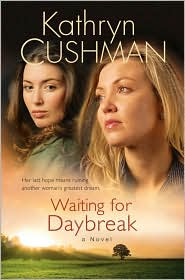 What led you to pick up this book? I read Kathryn Cushman's first book, A Promise to Remember, a couple of months ago, and loved her writing style. Fortunately, she obliged me by immediately producing a second novel.

Describe the book without giving anything away. Paige is a pharmacist who once made a simple mistake that dramatically changed her life. Now, with an ailing mother in need of money for special treatment, Paige feels obligated to keep her history quiet when a new job opportunity with excellent pay comes along. But, the past has a way of coming back to haunt you.

Clarissa has led a charmed life and dreams of opening a new pharmacy in her grandfather's building. But, first she must prove herself as a pharmacist. When Clarissa's grandfather hires Paige to help out at the pharmacy, Clarissa does everything in her power to drive the intruder away. Will Paige continue to ignore Clarissa's arrogance and the dangerous errors that could hurt the patients who are their customers? Or, will she speak up and risk the loss of everything, including her mother's health?

What did you like most about the book? I love Kathryn Cushman's writing style; her books have a smooth flow that makes for quick reading, but she tackles tough themes. Also, there's always the question of "preachiness", when it comes to Christian lit, and I didn't find it preachy at all, although it was a little heavier on Christian elements than some of my recent Bethany House reads. While I strongly feel that nobody wants to read a thinly-disguised lecture about anything, including personal agendas that have nothing to do with religion, Christian writing is held under the proverbial microscope in a way that authors of few other genres have to deal with. Dean Briggs wrote an excellent post about the topic, entitled "Writing Beyond the Secular/Faith Barrier" at Breeni Books, this week. I highly encourage you to check it out.

What did you think of the characters? Cushman does a great job of creating characters who are Christian without pushing an agenda. I liked Paige a lot because she was going through some very challenging circumstances but she did her best to stay strong. As part of her struggle to keep up the faith, she carried cards with Bible verses to work, something I've never managed to get around to (but have thought about . . . shoot, I even have plenty of cards lying about).

There is also a wonderful, quirky character that I just adored in Waiting for Daybreak -- Ora, one of the customers, who readily recommends Bible verses by their location (book and verse number) but doesn't have the actual words memorized. While I'm not quite sure the author meant to say this, I thought the fact that those verses didn't always apply was a good example of how Christians often mean well but are totally off-base . . . human, in other words.

Was there anything you didn't like about the book? It had a bit of a sagging middle. And, it was a little hard reading about Paige's mother, since my own mother attempted to get into the well-known treatment center at which Paige's mother received her therapy. But, the cancer bit was simply a part of Paige's characterization and was important to the plot without the book becoming a "cancer book", so I never felt like tossing it aside because of either the cancer (which usually drives me crazy if it's central to a book's storyline) or the mother-daughter relationship. I did, however, feel like the fact that Paige's mother was treated far from home meant the pressure of the illness had a little less impact on the story.

Recommended? Absolutely. Waiting for Daybreak is a good story. I'm looking forward to seeing what this author comes up with in the future.

Cover thoughts: I wasn't thrilled with the cover when I saw it because Cushman's first cover also had a two-chick thing going, but it turned out to be every bit as perfect and relevant as that of A Promise to Remember.

Totally irrelevant side note: Bybee of Naked Without Books had a terrific discussion going, recently. What, she asked, is the phrase in the book which is the source for the title? Nobody knew. In fact, she came to the conclusion that there is no particular term and, therefore, one needed to be invented. She held a vote and the winner was "title drop". I grabbed a post-it when I came to the title drop in Waiting for Daybreak. Here is a part of the passage that includes the title drop, a conversation between Ora and Paige:

"If you lived in a city back in those days, and an army was outside the walls, when do you reckon would be the scariest time?"

"When the enemy started shooting arrows?"

"No. It would be in the dead of night, when you couldn't see a thing, but you could hear the clanking of armor as enemy soldiers surrounded your city, and the heavy footsteps of who knows how many. You're not sure what's out there, but it sure sounds like it's going to be bad. It's the time you'd want to get out of the city and quick, right?"

"But see, this is all about staying and standing your ground. Things sound bad now and you've got no idea what terrible things are out there, but God's gonna help at break of day. You just got to have enough faith to stand firm all night at the city wall and wait for daybreak."

Isn't that wonderful? Thank you, Bybee, and heads-up to the Webster's people.

Before I totally forget, you really need to dash over and Estellify Yourself, if you haven't already. Yes, a new issue of Estella's Revenge is available for your reading pleasure! Wahoo!

Oh, oh, oh! This week I found a bookmark, upon the back of which I had written vocabulary words with page numbers. Has anyone else ever used a bookmark to keep track of vocabulary words? I did that for dinosaur years -- wrote the words, sometimes with an accompanying phrase, on the back of a bookmark and then defined them in a notebook when I finished each book. Because, let's face it, I'm a serious nerd. That's a good thing, in my opinion, as you may have noticed that a few very special nerds commonly make (and often generously share) excessive fortunes. Bill Gates comes to mind. Definining words in a notebook must have helped to expand my mind a bit, because only one of the vocabulary words on the back of that bookmark made me squeeze my eyebrows together, that being the word "penetralium".

Yes, of course I googled it, although I must say it was not an easy word to find:

penetralium – the innermost part of a building

No photos, today. I am still dragging and plan to sleep late for a couple of days to see if that helps. The husband is back from Florida! Wahoo! I can be a bum, again! Oh, no, I can't because I have Christmasy things to do. Well, it was a nice idea. I'm off to bed in my cozy penetralium. Very soon, I shall tell you about a pie. But, don't hold your breath because I need to get some sleep, first. Later, gators!
Posted by Bookfool at 6:48 PM