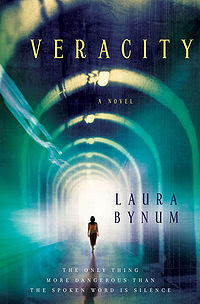 "In a world where critical thinking skills are almost wholly absent, repetition effectively leapfrogs the cognitive portion of the brain. It helps something get processed as truth. We used to call it unsubstantiated buy-in. Belief without evidence. It only works in a society where thinking for one's self is discouraged. That's how we lost our country. And why it's stayed lost for so long."

Harper Adams was six years old when the Pandemic hit. The Confederation of the Willing came into being after the Pandemic devastated the world. Now, the utterance of any of the forbidden words is immediately noted through the chip, or "slate" implanted in each citizen's neck and punishments are severe.

A "sentient", or a person who sees auras, Harper has risen to an important position in the government. When her best friend is killed, Harper makes plans to leave the city, her job, everything she's known. After burning out her slate by uttering forbidden words, she must face the brutal police, known as "Blue Coats", who are sent to stop her. Harper's skills are needed to overthrow the government and bring back the old way of life. But, time is short and the task is daunting. Are there even enough people to start a war? Or will it all be over before it begins?

Oh, where to begin. I enjoyed Veracity on so many levels, but I did have a few quibbles with the storyline. Let's start with what I liked. I liked the description of Harper's special ability to see auras. I had a friend, now deceased, who told me she had seen auras for as long as she could remember. Her description wasn't exactly the same and, if anything, I thought Harper's talents were a bit overblown. But, the way she described seeing colors was similar and the strength of Harper's ability was necessary to the plot.

In general, I loved the storyline and the way the author gradually revealed bits about this new world and how it came into being by smoothly jumping between time periods. There were a few little twisty bits; some I figured out and one I didn't. The fact that I managed to unravel some of the secrets of the Pandemic didn't ruin the book one bit and the single surprise made me laugh. I thought it was a terrific twist.

My biggest problems with the book had to do with the timeline and the world. The Pandemic in this dystopian novel occurred in 2012. I always feel like one of the biggest mistakes -- and the most frequently made -- in futuristic writing is that authors don't shove their timeline far enough into the future. 2012 is just two years from now! When that year passes, the book will have lost its meaning and it's potential to become a classic of science fiction, simply by virtue of the fact that a futuristic fictional event will have been rendered a revision of the past. Date is important. It would have been much more believable, in my opinion, if the inciting incident was set 50 years in the future, rather than 2.

Having said that, I truly enjoyed this book. It's extremely dark; the punishments for even the slightest infractions are shocking -- rape, torture, death. Because of that, I took my time reading Veracity. I can only stand reading about a fictional world that is utterly depressing and horrifying in short bursts. And, yet, I loved the theme of this book: Those who don't think for themselves are easily persuaded to believe what those in power want them to believe, with devastating results.

4.5/5 - A well-crafted world, a strong moral theme and solid writing made this book a winner for me. Half a point off for not setting the dystopian world far enough into the future to be wholly plausible.

Addendum: I asked my 18-year-old what he thinks about setting futuristic sci-fi novels too close to the present. He said he thinks the timeline is irrelevant because, "All futuristic sci-fi eventually becames alternate history." Okay, someone explain to me why that kid has such a lousy grade-point average. He is so not stupid. Maybe he's one of those smart, bored kids? His ACT score would bear that out. Anyway, I thought his thoughts were worth sharing.
Posted by Bookfool at 3:35 PM