Winging It by Jenny Gardiner 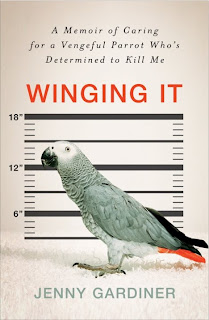 Winging It: A Memoir of Caring for a Vengeful Parrot Who's Determined to Kill Me by Jenny Gardiner
Copyright 2010
Gallery Books - Memoir/Pets
240 pages
There is one thing you should know before you read this review. It's totally biased. Winging It pissed me off so thoroughly that I don't know how to present a totally fair review and you should read other reviews like this one or this one (although, to be completely forthcoming, both of those were actually written by the author's friends, so they're not totally unbiased, either) if you want to get a really balanced viewpoint of this book -- or just go to Amazon, where it's averaged a shocking 4 stars. Obviously, I'm bucking the trend, here.
Billed as a memoir that centers around the African Gray parrot owned by Gardiner and her family, Winging It is less about the parrot than the author and her experiences as both pet owner and parent, but let's talk about the parrot, first. Graycie came into the Gardiner household as a gift. The author's brother-in-law, Scott, was living in Zaire and, back in those days (the 80s, I think), regulations on importing animals were pretty much nonexistent. The timing was awful. Although the Gardiners wanted to own a parrot someday, they were just starting a family and didn't have the time to properly care for a high-maintenance pet. They shoved her cage into the basement and pretty much ignored her, apart from feeding, cleaning and trying to get her to climb up an arm or talk.

My bird-owning friends tell me that trying to coerce a pet into doing what you want is "behavior modification" and they will mutter and curse if you get them going. I was more concerned that the pet deserved a home where she could receive proper attention, myself.

Eventually, the parrot moved to a more prominent place in the house and the author apparently spent hours and hours cleaning her poop and tending to Graycie's many injuries - many, many injuries. I'm not a bird owner and never have been, so I can't say whether or not Graycie's frequent injuries could have been prevented, but I can say I wondered. I definitely grew weary of the repeated comments that the author didn't have time for the parrot:
So what progress we had made began to deteriorate as a result of unplanned-for neglect.
I almost ditched the book when I got to the part where the author's cat went into heat. I've spoken to the author and she explained to me that neutering wasn't done as early in those days as it is now. I knew that. Back in the 70s, my family owned a cat who spent much of her time outdoors and she became pregnant before she reached the age considered acceptable for spaying. We kept one of the kittens and then got mama cat, Queenie, spayed.

The spaying issue wasn't the problem, though. My concern was not simply that the cat wasn't neutered but that the poor kitty was not only adopted by someone who claimed to not have money for an adoption fee (so, how did she plan to pay for the kitty's care?) but also was later locked into a bathroom with a male cat so that she could get it on and cease wailing. Just so we're clear, here, cats are not people. Biological imperative in the animal kingdom and human desire are not equivalent, as far as I know, and cats don't necessarily have fun mating.

Back to the cat . . . the idea, said the author (my adaptation of her words), "We can have cute little kittens and then give them away!" And, that endless caterwauling would end. It didn't work. After locking the poor kitty into a bathroom with a friend's male cat (a stranger to the female kitty) and ignoring the fighting noises for some time, the cats were released without having mated. Form your own opinion; I call that cruelty.

As to the parrot . . . she was just kind of there, pooping in the background.
Was there anything good about this book? Well, as I said, you'll have to read other reviews if you want to hear something positive, but I can tell you that I read quite a few and there were plenty of people who thought the book was entertaining. The consensus when I first read reviews at Amazon seemed to be that the book was not about the parrot and that it was, in fact, more sad than funny if you looked at it purely from the viewpoint of parrot ownership. But, plenty of people thought the stories about the Gardiner family were enjoyable reading.

I'll be honest; I didn't find the family stories entertaining, either. It seemed to me that the central theme of the book was, "First we bought a little house. Then we bought a bigger house. Then we bought this really cool, whopping big house! And, there were disasters and animal behavior issues and sick kids that we dragged on planes so that we could expose as many people as possible to our illness and then . . . we bought two houses!!!"

Dude, this book was so not for me. But, please read other reviews if you're considering it. I feel bad about trashing it and have to say . . . my thanks to the author and Gallery Books for the opportunity to read the book. Sorry I couldn't think of anything really nice to say. At least I didn't throw it at the wall before I passed it on. That's good, right?

by Vicky Myron with Bret Witter - I liked reading about Dewey (but not the autobiographical portions about the Ms. Myron) and am really looking forward to reading about how he inspired others.

I picked up Jane Austen's Emma, this afternoon, and the spell has been broken! I am finally reading, again. 2 or 3 days . . . I'm not sure how many I went without reading a word but it was definitely my version of hell on earth.

Most fun I've had all day:

One more review forthcoming, primarily so I can bury this one. I like honesty, but sometimes it can be really, really painful and I don't enjoy inflicting pain.
Posted by Bookfool at 9:00 AM