A Mango-Shaped Space by Wendy Mass 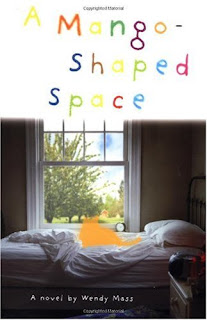 School starts in a few days, and I'm trying to squeeze every last drop out of summer. Literally. I'm squeezing lemons for the lemonade stand Zack and I set up on our street corner.
"Why don't you just use lemonade mix like everyone else?" Beth asks as she passes through the kitchen and into the pantry. She returns with a few sandwich bags and a Magic Marker.
"This is a quality establishment," Zack replies, carefully stirring in the sugar with a long spoon.
"What are the bags for?" I ask as Beth lays them flat on the counter. Zack stops stirring to listen.
"If you must know, I'm sorting herbs for a big project I'm working on."
Zack and I raise our eyebrows at each other.
"If you turn me into a frog, I'm telling Mom and Dad," Zack says, holding the spoon in front of him like a sword.
Beth grunts and turns her back to us. We continue making the lemonade and leave her to her sorcery.
When we are alone again, I ask Zack, "Does the yellow of this lemon remind you of anything?"
"Huh? Like what?"
"Oh, I don't know. Like the letter a or the number four?"
He stops midstir. "What are you talking about?
"Never mind."

Everyone thinks I named my cat Mango because of his orange eyes, but that's not the case. I named him Mango because the sounds of his purrs and his wheezes and his meows are all various shades of yellow-orange . . .

Mia has kept a secret since the time she wrote a math problem on the board in school and was heckled for explaining that she chose different chalk colors to match the color of each number. Everyone thought she was crazy, even her parents. But, soon she'll know better. She has synesthesia, a condition that causes her to see sounds, numbers and letters in color.

When Mia meets a little boy who also sees things in color, she's shocked. But, then she investigates and finds that she's not alone. As she gets to know other synesthetes via her home computer, she finds ways to enhance her ability, to the point that she's losing touch with reality.

Then, disaster strikes and Mia finds that she has to lose something crucial to realize what she already has.

A Mango-Shaped Space is a quirky and fun book with a very serious side. I'd heard of synesthesia, but I've not ever read much about it. A friend of mine was apparently a synesthete, although I'm not sure she knew that any more than Mia does at the opening of the book. My friend told me she saw numbers and letters as colors and that she saw auras around people, but I think she thought of it as some sort of psychic ability.

In A Mango-Shaped Space, Mia is totally clueless until she meets a little boy in a grocery store and they have a very brief conversation.

He giggles and comes out from behind his mom a little more. "Mia is a pretty name."
"Thanks," I say, flashing him a Winchell smile. My family may not be blessed with height, but we have good teeth and try to show them when we can.
"It's purple with orange stripes," he announces, his voice more assured now. "I like it a lot."
Still smiling, I shake my head and say, "No, silly, it's candy-apple red with a hint of light green." And then what he said hits me. My smile slowly disappears, and my heart starts to pound.

Her encounter with the boy is so brief that Mia doesn't even know if he lives in town. But, now that Mia knows she's not alone in her ability, she investigates -- and tries to hunt down the little boy. She gets the same sort of reaction as she got the first time; everyone thinks she's got a mental problem, at first. Then, Mia is referred to someone who can really help her, a neurologist who understands her condition and even leads a support group. I'm including a lot of quotes because I adored the characters in this book. Mia comes from a really odd but close little family and that gives the book a warm and unique touch. Zack is particularly fun.

"I think it's pretty neat," he says, following me inside.
"You do?"
"Sure," he says, grinning. "Now I know you're the strangest one in the family after all. And you had some stiff competition."

Mia starts connecting with other synesthetes online and finds that there are ways to enhance her ability. She becomes so bent on doing so that it's almost like a drug to her. Then, a shock makes her lose her her ability completely. At that point, she must decide whether she even wants to see color in every number, letter and sound. Is it really necessary to her? It's caused her all sorts of problems, especially in school. But, Mia finds herself feeling very alone and empty.

I thought A Mango-Shaped Space was just wonderful. Synesthesia is apparently considered a disability and it definitely causes Mia to have difficulty in certain subject areas. But, the author doesn't look at it quite that way. She humanizes Mia's dysfunction and shows how something that seems freaky and is a bit disabling can also have some very dramatic benefits. On the back cover of the book is a note that A Mango-Shaped Space is the "Winner of the ALA Schneider Family Book Award, honoring artistic expression of the disability experience." Cool. I think it's very deserving. It's also always refreshing to read a YA book that is clean. It's been a few weeks since I read the book, but I recall a single kiss and no swearing.

I'm going to try to make this a big whip-out-a-bunch-of-reviews day, in between errands. Okay, forget that. I ended up with more errands than expected, so we'll just stick with this one review for today. Happy Tuesday!
Posted by Bookfool at 8:52 AM