Catch-up time. I've fallen three months behind on monthly round-ups, so I'm going to peek in my rear-view reading mirror. 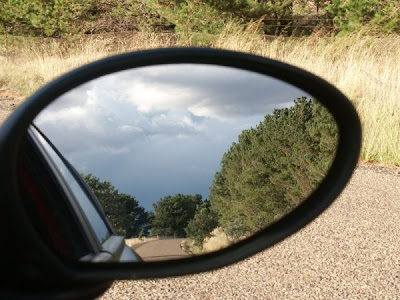 You just can't see all the books behind those trees. Image Source: Martin Pool's Blog

March Reads in Review (links to reviews provided, if applicable):

31. Cesar Takes a Break by Susan Collin Thoms, illus. by Rogé (CH) - A classroom iguana discovers there's a great big world to explore and plenty more friends to find when the children leave for spring break.

32. Don't Stop Laughing Now by various authors (E-H) - A collection of funny essays by a variety of authors. Poor husband had to listen as I read Dave Barry's article on males versus females aloud.

33. Mr. Midshipman Hornblower by C. S. Forester (HF) - The first book in the Hornblower series, about young Hornblower's early adventures as a midshipman.

35. That Cat Can't Stay by Krasnesky and Parkins (CH) - A family slowly gains more pets against the father's wishes, then eventually Dad goes to the shelter and adopts a dog, making the family complete.

36. The Invention of Everything Else by Samantha Hunt (HF) - Fictional account of a friendship between Nicola Tesla and a maid.

37. Postcards from a Dead Girl by Kirk Farber (GF) - The quirky tale of a man who begins to receive postcards sent from locations around the world by his dead girlfriend. See also: Guest post by Kirk Farber

38. I'll Mature When I'm Dead by Dave Barry (E-H) - Dave Barry's hilarious new book about getting older and wiser without actually growing up.

39. Ecomazes: 12 Earth Adventures by Roxie Munro (CH) - A book of beautiful mazes with hidden objects and descriptions of various ecosystems around the world.

40. The Lotus Eaters by Tatjana Soli (HF) - A Vietnam War photojournalist reflects on her dozen years of working, living and loving in the country as Saigon falls.

41. Flyaway by Suzie Gilbert (NF/Nature) - The memoir of a bird rehabilitator who found her passion in carring for birds.

42. The House with a Clock in its Walls by John Bellairs (CH) - An orphaned boy goes to live with his uncle and unleashes a bad wizard when he tries to cast a magic spell.
Posted by Bookfool at 6:52 PM

Email ThisBlogThis!Share to TwitterShare to FacebookShare to Pinterest
Labels: 2010 Reads, One Month's Reads in Brief