Fiona Friday and a review of Bird Girl by Velma Wallis

Fiona says . . . "Somebody did a crap job painting this ceiling." 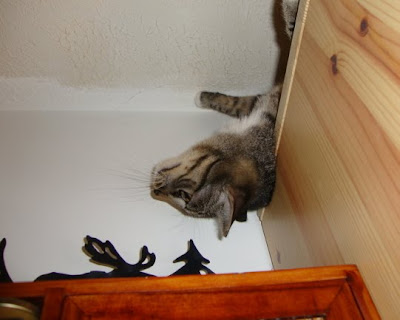 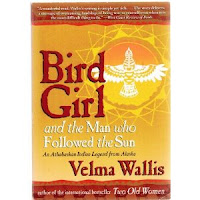 is a combination of two Gwich'in Alaskan folk tales with a little bit of artistic license thrown in to combine the two.

One tale is about a young girl, nicknamed "Bird Girl", who loves to hunt instead of cooking and sewing as the women are expected to do. Her preference is allowed by her parents, but it makes her a bit of an outcast. The other tale is about a boy named Daagoo, who has a bad case of wanderlust. Daagoo's curious about the land he's heard about in tales told by the elders, a land where the sun shines year-round. He owns the leather map passed down by those who traveled to this land and hopes to go there himself, one day.

Both Bird Girl and Daagoo are from the Gwich'in tribe, but they live in separate bands of the same tribe. Sometime during their adolescence, Daagoo and Bird Girl cross paths, but years pass before they meet up, again, and they both experience a tremendous amount of horror and pain before that occurs.

Daagoo often neglects the hunting he's expected to do, in order to explore, and eventually (when he reaches manhood), he is told he must do his part or the band will cast him out. He agrees, thinking eventually he will leave, when the time is right. But, during the annual caribou hunt, tragedy strikes and Daagoo is forced to take over as leader of his tribe.

Meanwhile, Bird Girl runs away from home when she's told she must marry and do womanly things. After only a short time, she's kidnapped by an enemy tribe then raped, beaten and abused for years. She is unable to escape till a brutal game played deliberately to humiliate and horrify her leads to a shocking act that rids her of her captors, forever.

Daagoo also experiences a number of horrors. He eventually goes on his trip south; but, even after finding the land he has long wished to see, another tragedy occurs and he returns home to his people.

There is a lot of gore and horror in this little book. That's not particularly unusual for folk tales, I suppose, but I was a little relieved to finish the book because it was a bit too much for me. Two Old Women (the first folk tale retold by Wallis) is much more palatable, in spite of a similar theme: Everyone must do his or her part to keep the tribe safe and well-fed or face the consequences (in Two Old Women, even aging is a hazard).

What I liked best:

The Tlingit people, whom I've read a bit about and find fascinating, allow Daagoo to stay with them for a time when he travels south, and then again when he returns to his people. They're peaceful and happy people. I particularly loved the part in which Daagoo is allowed to trade a song for something he needs -- I think for food, although I can't remember! I was so fascinated by the idea that a song could be considered something acceptable to barter away that I guess the item he got in exchange wasn't important to me. Wallis said that is actually a part of the original story.

Although it wasn't my favorite folk story and the violence was a bit too much for me, I still did enjoy Bird Girl and the Man who Followed the Sun and recommend it to anyone who both likes folk tales and has a strong stomach.