Field Notes from a Catastrophe by Elizabeth Kolbert 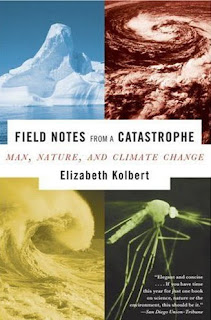 Field Notes from a Catastrophe: Man, Nature and Climate Change


As the snow is compressed, its crystal structure changes to ice. (Two thousand feet down, there is so much pressure on the ice that a sample drawn to the surface will, if mishandled, fracture, and in some cases even explode.) But in most other respects, the snow remains unchanged, a relic of the climate that first formed it. In the Greenland ice, there is nuclear fallout from early atomic tests, volcanic ash from Krakatau, lead pollution from ancient Roman smelters, and dust blown in from Mongolia on ice age winds. Every layer also contains tiny bubbles of trapped air, each of them a sample of a past atmosphere. --p. 30


The Vostok core, which is now stored in pieces in Denver, Grenoble, and on Antarctica, contains a continuous climate record stretching back four full glacial cycles. --p. 129


In legitimate scientific circles, it is virtually impossible to find evidence of disagreement over the fundamentals of global warming. Naomi Oreskes, a professor of history and science studies at the University of California at San Diego, recently tried to quantify the level of consensus. She conducted a study of more than nine hundred articles on climate change published in refereed journals between 1993 and 2003 and subsequently made available on a leading research database. Of these, she found that 75 percent endorsed the view that anthropogenic [human-caused] emissions were responsible for at least some of the observed warming of the past fifty years. The remaining 25 percent, which dealt with questions of methodology or climate history, took no position on current conditions. Not a single article disputed the premise that anthropogenic warming is under way. --p. 164


To research climate change, Elizabeth Kolbert traveled around the world, speaking to scientists who study changes in not only climate but flora and fauna affected by climate changes. In Field Notes from a Catastrophe, she explains in clear (but sometimes a little technical) terms how and why recent climate change has been proven to be man-made and what we can expect if changes aren't made . . . well, yesterday. It's been 4 or 5 years since the book was published and things were already looking ominous.


Field Notes from a Catastrophe is definitely a scary book. One scientist made a discovery that led him to go home and tell his wife that the good news is that the job is going well and the bad news is that the verdict is pretty much the end of life as we know it, not that far down the road.


Combine the text of this book with the daily reports of oil gushing into the Gulf of Mexico and it's a little hard to be optimistic about life on Earth continuing for as long as we'd like. The most fascinating facts, in my opinion, were some parallel discoveries by scientists in totally different fields. One discovered a buried city in the region of ancient Babylonia and came to the conclusion that a severe drought that lasted for many, many years led to the death of that city. Written records of that particular city and its lasting drought (unfortunately, I didn't mark those bits and can't recall the name) were previously thought to be mere legend but were proven accurate. At the same time, another scientist determined that the same drought was responsible for the end of the Mayan civilization.


The conclusion: (in my words) There is a breaking point beyond which civilizations cannot continue and humans die off -- even in advanced civilizations with specialized means for growing and storing agricultural products.


Meanwhile, a warming Earth means changing precipitation patterns. Just as some regions, like the American Midwest, are predicted to suffer from drought, others will experience more--at least more intense--rainfall. The effect is likely to be particularly punishing in some of the most densely populated regions on Earth, including the Mississippi Delta, the Ganges Delta, and the Thames basin. A study commissioned a few years ago by the British government concluded that under certain conditions, floods of a magnitude now expected no more often than once a century could, by 2080, be occurring in England once every three years. (As it happened, the very week I was in the Netherlands, thirteen people were killed by exceptionally heavy winter storms in Britain and Scandinavia.) --pp. 125-6


4.5/5 - Comprehensive research; excellent writing. A book that will leave no doubt as to how and why we've been misled into believing that the scientific community is divided on the issue of climate change and how much evidence there is to show that global warming is a catastrophe in progress.


I ordered my copy of Field Notes from a Catastrophe from Paperback Swap after reading about it in Nick Hornby's Shakespeare Wrote for Money, which I've yet to review. I'm not sure I'll forgive Hornby for a while. This book is frankly terrifying, although I certainly feel like Kolbert did such a great job of explaining ice core samples that anyone who has been misled into believing climate change is a farce should be able to read this book and understand just how much evidence there is of climate change over, literally, hundreds of thousands of years and how scientists are able to determine that recent change is human-driven.


There is also some explanation of the Bush administration's fascinating level of disinformation, the U.S.'s embarrassing behavior at Kyoto and wobbly American policies that pretty much negated any potential progress toward slowing global warming, in recent years. China is predicted to become the biggest contributor to climate change, in the near future.


The good news? Flowers are still blooming in Vicksburg. It's not over, yet. 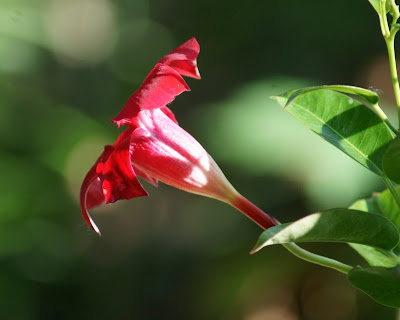 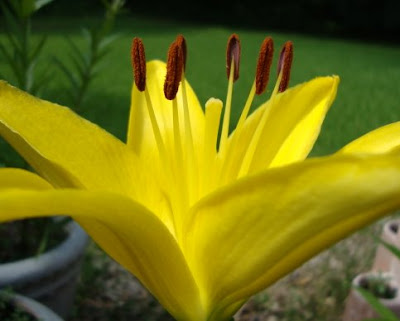