A Place for Delta by Melissa Walker 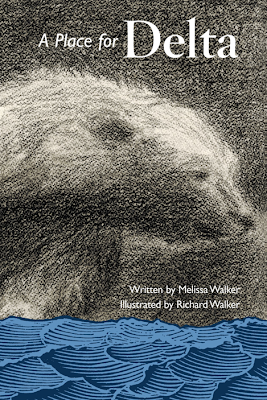 "Whoever shot the bear, also shot at my dad. The bullet that killed the bear probably came from the same gun. They want to find out who did the shooting, but they don't want anyone in town to know about it. It could be anybody."

"I don't understand. Why would an oil company want a polar bear dead?" Joseph asked.

"I'm not sure, but I heard Chipic say something about denning sites being in areas where they think there's oil and want to drill. A dead bear can't go back to her den."

I finished A Place for Delta nearly two weeks ago, but it seems apropos to include a quote about a generic Evil Oil Company when we're all so frustrated about the horrifying pollution of our beloved Gulf of Mexico. The author gives us one more good reason not to allow drilling in a fragile wildlife refuge in this quote -- the protection of bears whose lives are already endangered by shrinking habitat.

A Place for Delta takes place in Alaska and Georgia. Joseph Morse is eleven years old, the grandchild of a naturalist who researched salamanders and nephew of a wildlife biologist. His Aunt Kate is working in Alaska and he lives in Georgia, near his grandmother Lisi. As the book opens, Kate has just invited Joseph to join her in Alaska. At the beginning of the summer, an orphaned polar bear was rescued by one of the local scientists and Kate has been charged with its care. It's an exhausting, round-the-clock job and her boss understands that she needs help. Joseph quickly accepts her offer, knowing it's an opportunity for adventure he may never be offered, again.

As Joseph helps care for the bear, which Kate has named "Delta", he also gets to know a local girl named Ada. Ada and Joseph love a good mystery and they're curious about the things they're overhearing at their favorite restaurant and through the scientists and Ada's uncle, who works with Kate. Throughout the summer, they listen in on conversations and take notes in order to try to help solve the mystery of who killed Delta's mother and what the unfriendly men from outside are trying to hide.

I found A Place for Delta a little hard to get into, at first. It begins with Joseph's acceptance of the invitation to Alaska and then backtracks to explain his family's background as naturalists, along with the origin of Aunt Kate's and Joseph's parents' love of bears. The switch to the past kind of felt superfluous to me, at first, but then as I got into the story I realized that background was necessary. I still can't say I think it was handled in the best way, but the older scenes helped round out the story.

The author mentions in her notes (at the end of the book) that she specifically geared the story to 11-year-olds and had several 11-year-old beta readers give her advice on what was and was not of interest to them. I thought that was really fascinating. As I was reading, I realized that I had a little difficulty getting into the book because of the simplicity of the writing, but at the same time it occurred to me that I would have loved it as an elementary-school student. It's adventurous and has interesting characters. The only thing I really disliked was the fact that the author felt it necessary to describe almost every meal and snack eaten by the main characters. Each of those descriptions read like "lessons in healthy eating" and they really got on my nerves.

A Place for Delta is written simplistically and with quite a few deus ex machina bits (you can practically see the deliberate plotting to make things work together just so) and that makes it an awkward read for an adult. But, it's intended audience is middle readers, specifically around 11 years old, and for them I think the book is perfect. As a child, I know I would have loved some of the plot twists that seemed as if they were just a bit too convenient -- like the discovery of a hidden treasure when the combined group of scientists and Joseph's relatives needed money to create a foundation. That's fun stuff for a kid. I definitely recommend this book to those who are looking for an adventurous book for middle readers. It would make a great summer read for youngsters. It's clean - no bad language, no violence.

What I loved most about A Place for Delta:

The author is obviously passionate about her love of wildlife and the need to protect endangered animals. I loved the way she crafted the novel to clearly describe the importance of animals and the reasons polar bears are currently threatened (climate change, drilling in their habitat).

My thanks to Lisa, the fabulous Online Publicist and the author for the review copy! By the way, I absolutely love the cover illustration. The illustrations inside the book are somewhat less exciting but also lovely.

The Professor and the Madman by Simon Winchester - from J. T. Oldfield (Thank you!)
You'll be Sor-ree!: A Guadalcanal Marine Remembers the Pacific War by Sid Phillips - from Valor Studios, via Shelf Awareness

Semper Cool: One Marine's Fond Memories of Vietnam by Barry Fixler - from Exalt Press for the Vietnam War Reading Challenge

The Selected Works of T. S. Spivet by Reif Larsen - purchased at Sam's Wholesale club (this one's been on my wishlist for a while and SuziQ's wonderful review made me even more anxious to own a copy).

A Fiona Friday post will appear later tonight. Happy Friday!
Posted by Bookfool at 11:19 AM