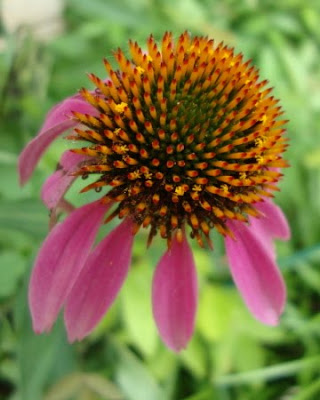 Wow, have I been a bad blogger! I'll try to amend that, but in the meantime a little update . . .
Reading Goes Splat
After I finished reading The Passage by Justin Cronin, I could not concentrate for about 3 days. Nothing appealed to me! I think that's partly because I was so immersed in Cronin's fascinating future world that I couldn't stand to look at another book and then needed time to exit the future, partly because I've been very tired and just didn't feel like reading (or writing -- and a days-long migraine wrapped that up with a tidy bow). Unfortunately, that included reading other blogs, so I went into "fly on the wall mode" and only commented 2 or 3 times, last week, and then this week I haven't even done that much. Either way, it's been a lousy couple of reading and writing weeks. But . . .
Things Improve
Emma by Jane Austen finally broke my reading slump. It took me a long time to finish (I've only read 3 books in the entire month of June!!!) but I finished it and I have found a new favorite heroine. Emma Woodhouse is a total delight. I can't believe it took me so long to get around to reading Emma. Since I am all astonishment at Jane's storytelling skills, I've moved on to reading Jane's Fame by Claire Harman. I began reading Jane's Fame once before -- about a month ago, I suppose -- but it was one of those times that I was balancing too many books at once and it fell by the wayside. So far, I'm finding it fascinating and well-written. Right after setting down an Austen is definitely an excellent time to delve into a Jane biography.
I've also begun to read Bird Girl and the Man who Followed the Sun by Velma Wallis, an Alaskan folk tale. This will be my third book by Velma Wallis, an author I discovered when we traveled to the Great White North and I sought out anything and everything to read about Alaska (both before and after that delightful vacation). Two Old Women was a ridiculously fortuitous find. You can find out how I acquired it and read my reviews, here, if you're interested:
Raising Ourselves: A Gwich'in Coming of Age Story from the Yukon River (mini review - page down to find it)
Two Old Women: An Alaska Legend of Betrayal, Courage, and Survival
It's so nice to be reading, again!!!
And, then there was that bloggiversary thing . . .
Totally dropped the ball on the annual celebration. My official beginning as a blogger (not including the first two attempts, both at sites that made uploading photos nearly impossible) was June 6, 2006. So, I just zipped right past the milestone of having completed 4 full years as a blogger. I knew it was coming and planned to get a cupcake and 4 candles to photograph, but then I missed the day. After about a week, I got around to buying myself a single cupcake . . . and it somehow managed to end up upside-down in the bag, so I just ditched the idea of taking a picture and have been hacking away at my cupcake. It's a big one -- white with white frosting and multi-colored sprinkles, along with some bizarre little plastic fish that are now swimming in the trash can. You would have loved it.
Speaking of bloggiversaries . . .
Has anyone else noticed the diversity of spelling when it comes to that word? Bloggiversary, blogiversary, blogoversary -- I don't even know how many ways I've seen it spelled. Here's why I spell it the way I do:
--The rule of double consonants after a short vowel - Like the word "blogger", it makes sense to me to double the "g" because of the short "o" in the word blog. Seriously, I actually sat around thinking through the whole spelling concept.
--The word "anniversary" contains a doubled consonant, an "i" (although, to be fair, that probably has to do with the Latin root word) and "versary". I'm really just imitating.
--I'm a fruitcake. Well, some of us just think spelling is really, really important.
I hope to get at least one review written, tomorrow, although I'm going to be away from the computer most of the day. In the meantime, Fiona and I wish you a lovely day. Have you read anything wonderful, lately? 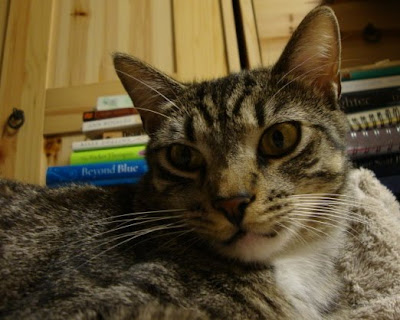 Fiona says, "Wherever I pose, there are books." Wahoo for both! Happy Wednesday!

Bookfool, trying to get her reading/writing groove back on