Christian the Lion by Bourke and Rendall 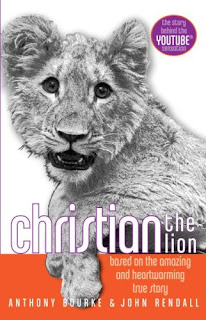 Christian the Lion
by Anthony (Ace) Bourke & John Rendall
Copyright 2009
Delacorte Books - Nonfiction/Ages 9-12
128 pages
I can't get enough of reading about Christian the Lion, the lion bought by authors Bourke and Rendall at Harrods in London and eventually released into the wild with the help of the actors who played Joy and George Adamson in Born Free, as well as Adamson, himself. You may have seen the YouTube video of Christian greeting Ace and John after they returned to Africa to see how he was doing. It brought tears to my eyes, of course. I'm a total sap, after all, but it is really an unusual and deeply touching video. Plus, he's just a big ol' kitty cat. That'll do it. Christian the Lion is the story of Christian, up to the time of the video.
I read a children's book about Christian, last year, and when I happened across this version for older children in the homeless shelter store, I grabbed it so fast you'd have thought I was trying to keep it away from someone. There was actually nobody else in the store at the time, but I was truly excited to see yet another book about Christian.
Born to zoo lions, Christian and his sister were the only two remaining cubs at Harrods when Ace and John, two Australians living in London, happened to see him in 1969. They thought a cage in a department store was a horrible place for a lion cub and decided almost immediately that they would buy him in order to give him a better life (his sister had already been sold). Christian the Lion begins with their discovery of Christian at Harrods and tells how they got to know the cub, brought him home to their flat over a furniture store and were granted permission to exercise him in a churchyard. As Christian grew, he eventually was no longer allowed to roam freely in the furniture store or play in the churchyard because he frightened people. By then, Ace and John had already begun to make plans to release Christian into the wild.
No matter how great the detail, the story of Christian is an uplifting true tale of human compassion, deep affection, and tender love. Christian the Lion satisfied my desire to know a bit more about Christian, but I'm still hankering to read the even more complete full-length version. There's a lovely section crammed with terrific photos, in the middle of the book.
I highly recommend Christian the Lion to animal lovers, people who love memoirs (kids and adults alike, although most adults probably would like to read a more in-depth version) and anybody else whose ears perked up when they saw the cover of the book. You should have seen my ears perk and my eyes widen, heard my pulse race.
Here's a more time-appropriate video of Christian's story (with music from that era). It goes a bit farther, showing how John and Ace spent time with Christian's pride. Lions are in extreme danger. I've been getting quite a few emails about lions from one of my favorite organizations, Defenders of Wildlife. Apparently, a very deadly poison is being used in their habitat -- and since there are only two places that lions still exist in the wild, their already rapidly declining population could easily be driven to extinction. Yikes! Did you know the Eastern Cougar was officially declared extinct, this week? ~sniffle~
Here's my little tiger, Fiona. If she read my blog, she'd undoubtedly have felt neglected, this week, so I figure it's her turn. 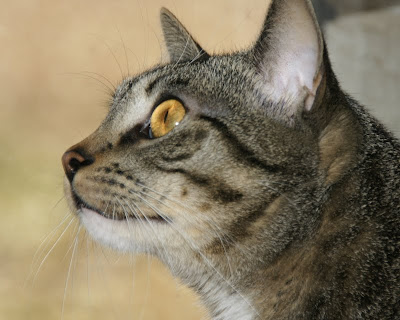 ©2011 Nancy Horner. All rights reserved. If you are reading this post at a site other than Bookfoolery and Babble or its RSS feed, you are reading a stolen feed. Email bookfoolery@gmail.com for written permission to reproduce text or photos.
Posted by Bookfool at 6:13 PM