The Mental Floss History of the United States by Eric Sass 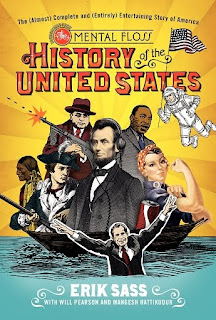 The mental_floss History of the United States
By Eric Sass
with Will Pearson &
Mangesh Hattikudur
Copyright 2010
Harper - NF/History
414 pages
If you can't actually declare war and whup on your enemy, the next best thing is accumulating colossal military power and loudly declaring that if there were a war, you would totally whup them worse than they could whup you. The great thing about this strategy is you never have to find out if it's true or not.
--p. 297 of The mental_floss History of the United States, Advanced Reader Copy (some changes may have been made to the final print version)
It took me about 2 or 3 months to read The mental_floss History of the United States, not because it was boring (it's absolutely not) or dry (obviously, it can be very entertaining) but because I liked it so much that I decided to stretch out the reading. Plus, the book is divided into short, topical sections, which makes it a perfect book to keep in your purse, the bathroom, the car -- wherever you tend to end up reading in bits and snatches. I kept mine in one of those places until I decided I'd goofed long enough and HarperCollins would probably like me to just get the reading over with and review the book, for crying out loud. Although, to be honest, nobody nudged me or gave me a hard time. HarperCollins publicists are really patient souls.
What I loved about The mental_floss History of the United States:
Oh, baby, this is the way to make history fun. Tm_fHotUS is not just informative. It's deliciously playful. The author has a terrific sense of humor and clearly had a great time poking fun at historical figures, but there's a plain-spoken authority to the text. As Sass melted down key facts -- beginning with the first human habitation of North America during the last Ice Age -- he also clarified events about which we've typically been misinformed ("Lies Your Teacher Told You"), broke up the text with pertinent (often side-splitting) quotes . . . shoot, even the topic headings are lively.
For example:
"Mr. and Mrs. Smith (and Mrs. Smith, and Mrs. Smith)" describes the unusual beliefs that led to Joseph Smith, Jr. being chased out of a number of places he tried to settle as he founded the Church of the Latter-Day Saints. The larger sections are divided into time periods, such as "A Superpower is (Accidentally) Born: 1930-1955," subheadings like "Profiles in Scourges" describe various people who did really awful things, and "Made in the USA" sections naturally are about American inventions.
Did I tell you even the quotes are often hilarious?
We should declare war on North Vietnam. . . . We could pave the whole country and put parking strips on it, and still be home by Christmas.
~Ronald Reagan, 1965, as quoted in The mental_floss History of the United States, p. 282 of ARC
What I disliked about Tm_fHotUS:
Nothing. Absolutely nothing.
The bottom line:
Whether you're history-stupid (like me) but love reading about history, anyway, or you like learning new things or you're pretty sure you missed an entire time period during your education in American History or you have a friend who has a birthday coming up, you need a copy of this book. Really. It's so fun you practically have to pinch yourself. Can history really be that entertaining? Apparently so. Highly recommended.
Oh, the utter coolness:
When we were in London, last August, we saw a performance of Les Miserables. I was in cheapskate mode and decided not to even buy a program, which I regretted. Last night, hubby was watching PBS and they were playing a 25th-anniversary performance that included an encore with original cast members. It was so awesome it literally gave me goosebumps all over, again, but it was doubly cool to see some of the cast members we fell in love with in August. I want to go back and see Les Miserables, again!!!
But it doesn't look like I'm going anywhere, anytime soon. Guess I'll have to just keep admiring and photographing kitty noses. 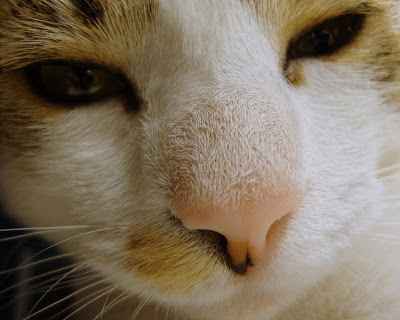 ©2011 Nancy Horner. All rights reserved. If you are reading this post at a site other than Bookfoolery and Babble or its RSS feed, you are reading a stolen feed. Email bookfoolery@gmail.com for written permission to reproduce text or photos.
Posted by Bookfool at 10:45 AM