The Mountains Bow Down by Sibella Giorello 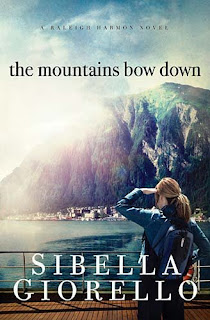 The Mountains Bow Down by Sibella Giorello
Copyright 2011
Thomas Nelson - Mystery
4th in the Raleigh Harmon series
373 pages
Sibella Giorello's website
I've only read two of the books in the Raleigh Harmon mystery series (apparently, the first book had a different publisher) but I think it's worth mentioning, up front, that the books stand alone well. In the third book, The Clouds Roll Away, Raleigh solved a murder and made a personal decision that she's now questioning, hoping time and distance will help her find an answer.
The Mountains Bow Down takes Raleigh away from her home. The entire book is set on or near the ship on which she takes a cruise to Alaska with her mother, her aunt and another woman. Raleigh, a forensic geologist working for the FBI, is serving as a consultant to a movie crew filming an action flick on board, although she has plans to explore Alaska's geology and get some much-needed mental rest.
But, when a woman goes missing and is found dead of an apparent suicide, Raleigh's vacation becomes a working trip. The suicide is suspicious and Raleigh has a limited amount of time to prove the woman was murdered before the cruise ends and a killer walks away. After asking for help from the FBI, her handsome rival from Seattle, Special Agent Jack Stephanson, shows up to assist. Jack treated her like a jerk when she was working in Seattle, but now he's oddly kind and surprises Raleigh by treating her with a fair amount of respect -- which, naturally, only adds confusion to her complicated personal life.
Will Raleigh change her mind about that decision she made back home? Can she protect her mother from information she's sure will send her mom beyond the edge of sanity? Will Raleigh be able to solve the murder before it's too late?
Well . . . it's a mystery and mysteries get solved so I think I can safely say you know the answer to the last question, but the journey to the answer is really quite a ride. Not being a big mystery fan, I was pretty surprised how gripping I found The Clouds Roll Away and how much I liked the stolid (but privately emotional) heroine and I can tell you Raleigh is consistent and I liked her just as much in The Mountains Bow Down.
What I loved about The Mountains Bow Down:
I really like Raleigh Harmon. She's a fascinating character. When I read The Clouds Roll Away, I thought she sounded like the kind of woman you hear about in Alaska -- the kind who can hike a mountain, camp for weeks without whining, build a cabin, heft food into the trees, shoot a moose, defend herself from a bear and then go home and make a meal for an entire village. Alaskan women are tough!! So, it really didn't surprise me to find out the author is a native Alaskan and I was actually hoping the author would eventually set a book in Alaska. While there's not a lot of Alaska in the book because it mostly takes place on the cruise ship, there was enough talk about the beauty of Alaska and the towns the ship visited to satisfy me.
The mystery itself was suitably complex (Giorello kept me guessing right up to the end) without becoming overwhelming and the other characters were well described. I was so fond of Jack and the man in Seattle who was Raleigh's former boss that now I'm absolutely dying to go back to the beginning to read the first two books in the series. I love, love, love the fact that Raleigh is a big eater. There are so many female characters who worry about food and their weight in fiction that it's nice to read about one who can put away a big meal, for a change. In general, The Mountains Bow Down is an engrossing read with excellent characterization, taut plotting and intelligent writing.
What I disliked about The Mountains Bow Down:
Oh, hmm. I can't think of anything. There are some icky characters but some of the movie people were meant to be overblown, arrogant, unlikable caricatures -- or, maybe I should use the word archetypes -- but I didn't find that they pushed believability beyond reason. There are some graphic descriptions of filth, a bit of gory body description and sexual deviance. The language is clean and there are occasional thoughts about Christianity on Raleigh's part, but I would say it's not for the faint of heart and in some ways deserves an R rating. It's been long enough since I finished reading the book that a few things have slipped away and I'm not certain how graphic the talk about the nastiest characters was, but it did turn my stomach a bit.
Recommended for mystery and thriller fans. Definitely not for the squeamish.
Cover thoughts: While I love the look of the cover, if you look very close it appears that the view of the skyline from the ship is . . . well, more like Hawaii than Alaska. But, the rest of the image is okay. I have a feeling there was a bit of cut-and-paste involved in the making of that cover, but it fits the story if you don't look too closely.
In other news:
I had a busy-busy week but I'm way too tired to write about it. Maybe later. The coming months are going to be unusually hectic for me, so I'm considering making only weekly or bi-weekly updates (apart from the 2 remaining tours I have scheduled). That would mean weekly mini-reviews and probably the usual Fiona Friday posts. The alternative is to do only monthly updates; I definitely will not have time for frequent posting but I don't want to give up the blog completely. Thoughts are welcome.
Fiona missed you:
But, she had an excellent time watching birds. So did Isabel. 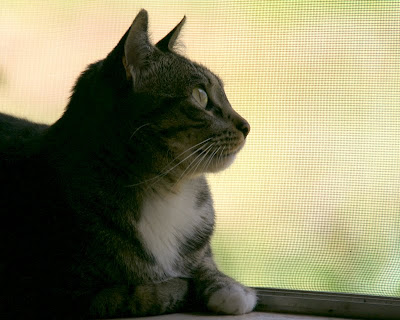 Did anyone get to see the Supermoon? We lucked out and got to see it from the moment it rose over the horizon to well after it lost that gorgeous orange glow. But, we had to hop into the car and rush to the high school parking lot to take pictures because trees were blocking the view. I had loads of fun snapping pictures and have really enjoyed looking at the gorgeous photos other folks took.
I managed to finish Cutting for Stone in time for my F2F book group's meeting. I'll tell you about that, later. Gotta get some shut-eye. Nightie-night!
©2011 Nancy Horner. All rights reserved. If you are reading this post at a site other than Bookfoolery and Babble or its RSS feed, you are reading a stolen feed. Email bookfoolery@gmail.com for written permission to reproduce text or photos.
Posted by Bookfool at 10:19 PM