It Happened One Bite by Lydia Dare 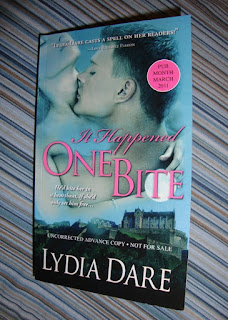 It Happened One Bite by Lydia Dare
Copyright 2011
Sourcebooks Casablanca - Romance/Paranormal
390 pages
Goodness, that's a steamy cover, isn't it? Guess what It Happened One Bite is about. Go ahead, guess.
Kiddo: "There's a vampire, right?"
Yes, but not just a vampyre (<---that's how the author team known as Lydia Dare spells it). There are witches, too. And, a werewolf. But, please, don't call him a werewolf. That's an insult; he's a Lycan. "Werewolf" is the equivalent of calling a vampyre a "blood-sucker". Who knew?
It Happened One Bite begins with a coven of witches casting a spell on James Maitland, Lord Kettering, basically putting him into a form of stasis. He appears to be a sweet, innocent vampyre just minding his own business, out for a smoke. But, the witches are really pissed off about something. At least, it seems that way.
Fast-forward 20 years and there's an entirely new generation of witches, the daughters of the women in the original coven. Blaire Lindsey is one of them, a "battle-born" witch. Her brother, Captain Aiden Lindsay, has inherited a castle that Blaire didn't know existed and of which he had only unconfirmed, vague memories. And, he's just dying to see his new digs. Blaire, Aiden and their little brother, Brannock, take off to check out the castle and find a very dusty castle in good condition -- and a little surprise. There's a vampyre in the cellar.
Blaire's return has broken the spell, but with the awakening of a very smelly James Maitland comes something even more sinister (Yippee -- danger! Conflict!) Plus, naturally, it's a romance and you can probably figure out who is going to fall in love with whom and why there might be some problems involved in the romance. Why did Blaire's mother and the other women of the previous coven lock Lord Kettering up for 20 years? Can Blaire really save her family from his dangerous enemies by letting Lord Kettering do that to her??? Yes, of course, it involves some erotic blood sucking and at least one graphic love scene; fortunately, there's not a great deal of sex.
What I loved about It Happened One Bite:
Fluff break! I like a little romance, now and then. Admittedly, It Happened One Bite is pretty silly and I don't get the whole concept that having one's blood sucked can be in some way erotic. I just don't. But, there was definitely something about this particular story that kept pulling on me. I liked Blaire and Lord Kettering. Blaire's brother Aiden was nice in a "big brother protector" way and young Brannock is just as cute as a bug's ear. I liked the setting and the storyline, although I did think there were some plot holes and the ending and beginning didn't quite mesh. In general, a plucky heroine and a romance that was at least unusual from my end (I've never read a witch/vampyre romance) made It Happened One Bite a pretty good read -- not great, not awful. Pretty good.
What I disliked about It Happened One Bite:
Vernacular. Argh!! Scottish vernacular!!! Major ugh!! I do not like having to mentally translate. Example found at random:
"Brannock Lindsay!" a woman cried. "I doona have time for such nonsense. Climb inta bed. We've got a long day ahead of us tomorrow."
"But, Blaire," the child complained, "I just want ta catch the kitty first."
"Aye. Ye always have somethin' ye have ta do first. But tonight I doona have the patience for it." Her voice dropped as she grumbled, but he heard her nonetheless. "Only ye, Brannock, could befriend a mangy, mottled bag of fur as soon as we arrived. "Ye're lucky it dinna scratch yer eyes out."
"It's no' a bad cat, Blaire."
--p. 27 of It Happened One Bite, Uncorrected Advance Copy. Some changes may have been made to the final print version.
Personal opinion and one I share with the author of The Prime of Miss Jean Brodie, Muriel Spark: Accent can be detected just fine via the use of properly-spelled wording. The structure, cadence and the use of local slang will make dialect clear. It's not necessary to guide readers like the blind via misspelled words. That's my opinion and I stick to it . . . well, most of the time. Sometimes I change my mind. It's a woman's prerogative, you know.
The bottom line:
Don't go into It Happened One Bite expecting brilliant writing. Read it for escapist paranormal entertainment and offbeat romance. There are some astoundingly stupid moments. You won't believe how the battle between vampyres ends, for example. To be honest, I didn't care. I knew what I was getting into when I picked up the book and I liked it. I did hang my mouth open a bit, a couple of times, and there were moments that the tension was oddly broken when it should have remained taut and action-filled. Truly, it just didn't faze me. I was in the mood for a change of pace and It Happened One Bite was definitely something different. I'd particularly recommend this one to paranormal romance lovers.
Speaking of fun: 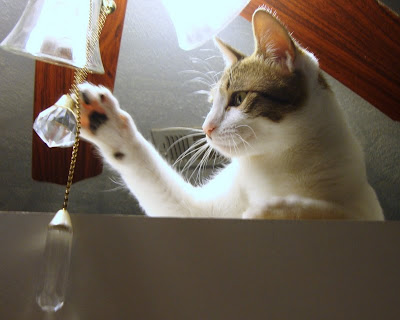 Wheeee! Ceiling fan pulls are a hoot! I didn't like the photos I took of Izzy chewing on the chain and the little crystal pulls, but I'll keep trying to get one I like. It's so fun watching her play up there. She's going to be irritated when we finish painting and move that cabinet away from the ceiling fan.
©2011 Nancy Horner. All rights reserved. If you are reading this post at a site other than Bookfoolery and Babble or its RSS feed, you are reading a stolen feed. Email bookfoolery@gmail.com for written permission to reproduce text or photos.
Posted by Bookfool at 7:31 PM