Staying at Daisy's by Jill Mansell 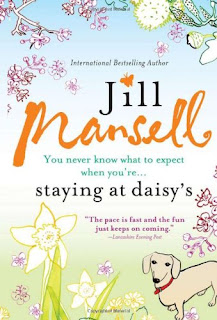 Staying at Daisy's by Jill Mansell
Copyright 2010
Sourcebooks Landmark
Orig. Published 2002
501 pages
Daisy MacLean has had her fill of good-looking, dishonest men. Even when tragedy brings her together with her no-good, soon-to-be-ex husband's mistress, it's no great surprise. She's better off without him. Daisy's got a great job working at her father's hotel and she's perfectly content.
But, when the handsome athlete Dev Tyzack becomes a guest at the hotel, it's clear he's interested. Daisy tries to stay away from him, but it's nearly impossible to avoid such a magnetic attraction. Then, a former boyfriend shows up in need of a place to sleep. Josh may not be the handsomest man she's dated, but he's trustworthy and kind. Will Daisy settle for a relationship lacking zing or take a chance, again?
Maggie is in love but she's middle-aged and the man she's seeing is not interested in commitment. She's got to be realistic. Their arrangement is for only one purpose and, like it or not, she knows she will continue seeing him, even if it breaks her heart and she finds their clandestine affair humiliating. Will Maggie be able to give up the man she loves when he starts seeing someone else? Or is she hopelessly hooked on him?
Tara's dating life has been nothing but a string of disasters. One man after another has used her and walked out. Now, a former love has shown up in her life and he makes her feel loved and appreciated. There's only one catch: He's a newlywed. Is Tara being used or does he really love her? And, what if Daisy finds out? If there's one thing that will upset Daisy, it's finding out Tara is involved with a married man.
The cover of Staying at Daisy's says, "You never know what to expect when you're . . . Staying at Daisy's." Boy, that's the truth. In fact, I never know quite where Jill Mansell is taking me, when I open one of her books. She is a master at creating characters who are entangled with more than one person and confusing the issue of who everyone will end up with. She's a carrot dangler, really. It took me a long, long time to figure out who Daisy and Tara were going to end up with and what would happen to Maggie. I love not knowing. It's always so much more satisfying to read a romantically-themed book that isn't transparent and predictable.
Daisy is a slightly more subdued character than Mansell's usual heroine, but she's really no less spunky and admirable; and, there are lots of characters to love. The only real problem I had with Staying at Daisy's was that it seemed like the theme leaned toward, "Men are tremendously unreliable bastards, in general, but now and then you get lucky and find a decent chap." I think that was because Daisy, Tara and Maggie were all hurting or frustrated in some way. But, as usual, there was a lovable cast with a few people you wanted to swat for either arrogance, stupidity or for being just plain rotten. They're a realistic hodge-podge, really.
The Bottom Line: While I wouldn't say Staying at Daisy's is my favorite by Jill Mansell, I became every bit as immersed in the storyline and invested in the characters as I have with the rest of her books and I still highly recommend it. Believable, likable characters with plenty of spunk and wit, a nicely twisty storyline that keeps you guessing and delightful writing make Staying at Daisy's a winner. Infidelity, tons of innuendo and falling into bed with the opposite sex too easily tend to be a little annoying. But, the writing is done with such flair -- zippy dialogue and loads of surprises -- that I'm convinced there's no such thing as a bad book by Jill Mansell. Definitely recommended.
Cover thoughts: I love the cheery covers of Jill Mansell's books, although I don't think the content is clear from the covers and recent releases -- while colorful and lively -- also are hard to distinguish from one another. So, I like the cover but I don't think it says much about the content and I'm hoping there will be some changes to covers of future Mansell titles.
In other news: I've got a hair-pulling migraine, today, although at least my medication has taken the edge off it enough that I can look at a computer screen. Earlier today, I couldn't even do that without the light of the monitor causing blinding pain. So . . . I'll just keep this post "short" (for me) and chatter more, another time.
©2011 Nancy Horner. All rights reserved. If you are reading this post at a site other than Bookfoolery and Babble or its RSS feed, you are reading a stolen feed. Email bookfoolery@gmail.com for written permission to reproduce text or photos.
Posted by Bookfool at 1:43 PM