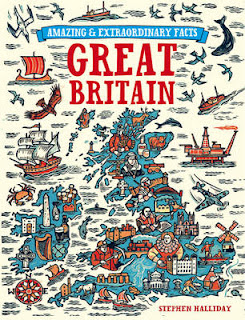 Just a note before I start writing this review. Kiddo starts school, today, and is back to living in the dorm . . . so it's kind of quiet. I figured while there's a lull and I feel like writing, I'll go ahead and try to whip out a review. Thanks so much to all who left feedback on the idea of weekly posting. More on that in a bit.

I bought Amazing & Extraordinary Facts: Great Britain at the Victoria & Albert Museum in London. I love books like this, with tidbits of history, and it's become a recent habit to purchase one or two books about the areas I visit, while there, then extend the joy of my travels by reading them after I get home.

I chose Amazing & Extraordinary Facts: Great Britain over some other books that interested me because I happened to flip open to a passage that answered a question I've had for some time. I had no idea what the word "navvy" meant. I could have looked it up online, but it's one of those words I've seen while reading and I just didn't bother to take the time to hop up to research when I saw it. Nor did I apparently think it was worth a Post-it.

The British canal system has added two expressions to the language. Navvies, or navigators, were the armies of labouring men, often Irish, who dug out and constructed the canals in the 18th and 19th centuries and went on to build the railways. 'Legging it' referred to the process by which canal boats were manoeuvred through tunnels, where horses could not tow them. Men known as 'leggers' would lie on planks set across the boat and 'walk' or 'leg' the boat along by pushing against the walls (or roof) of the tunnel with their feet.

I expected Amazing & Extraordinary Facts: Great Britain to be more of a quick-bite book of factoids without any real depth and I was pleasantly surprised to find that the book was far more informative than anticipated. I'm particularly fond of the various descriptions of items that can still be viewed in Great Britain, such as the oldest medieval carving (there's a good bit of "oldest" this-and-that). Since we love Great Britain and will undoubtedly return in the future, I'm going to eventually reread Amazing & Extraordinary Facts: Great Britain and take notes on places to visit. I also found the food and drink section fascinating, particularly the info about bread and the humorous fact that foods reserved for the poor were far more nutritious than the more refined, heavily sugared and expensive foods that only the wealthy could afford.

I also got some great ideas for places to visit in Yorkshire from Freya North's Pillow Talk, which I hope to review, soon.

There's a series of these small books of facts and I'd love to read more, particularly those on Kings and Queens, London Underground Facts and the English Countryside.

I've decided I'm going to shoot for doing weekly updates on Tuesday or Wednesday, when I'm not able to post individual reviews. There may be occasional spurts of activity when I have time and/or happen to be in the mood to write. Right now, though, I'm going to take a quick pre-exercise-class nap. Happy Monday to all!

©2011 Nancy Horner. All rights reserved. If you are reading this post at a site other than Bookfoolery and Babble or its RSS feed, you are reading a stolen feed. Email bookfoolery@gmail.com for written permission to reproduce text or photos.
Posted by Bookfool at 10:37 AM